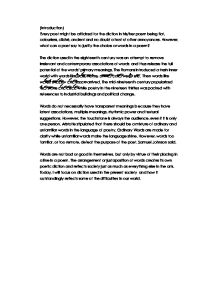 I will be examining two poems, The History Teacher by Billy Collins and The the impotence of proofreading by Taylor Mali.

(Introduction) Every poet might be criticized for the diction in his/her poem being flat, colourless, clich�, ancient and no doubt a host of other annoyances. However, what can a poet say to justify the choice or words in a poem? The diction used in the eighteenth century was an attempt to remove irrelevant and contemporary associations of words and thus release the full potential of the words' primary meanings. The Romans introduced a fresh inner world with words like pale, home, child, cold, weep etc. Then words like water, shadow and moon arrived. The mid-nineteenth century popularized red, stone and dead while poetry in the nineteen thirties was packed with references to industrial buildings and political change. Words do not necessarily have transparent meanings because they have latent associations, multiple meanings, rhythmic power and textural suggestions. However, the touchstone is always the audience, even if it is only one person. Aristotle stipulated that there should be a mixture of ordinary and unfamiliar words in the language of poetry. Ordinary Words are made for clarity while unfamiliar words make the language shine. However, words too familiar, or too remote, defeat the purpose of the poet, Samuel Johnson said. ...read more.

If a child touches it, he/she would experience the pain and make note not to touch the pot again. However, if someone deliberately changed the pot of hot water to warm water every time and told the child that it's okay to touch hot water, the child would touch it and feel nothing, absently thinking that it is alright to touch hot water. This method would be useful if that 'someone' pre-arranged everything in that child's life. Unfortunately, when the child grows up, he/she will continue to believe that it won't hurt to touch hot water and will eventually have an accident, but will not know what to do as he/she has no previous experience in it. Similarly, the children in the poem are told that everything in the past was insignificant and there was no serious harm done. The children would grow up believing that and as the saying of George Santayana goes, "those who cannot remember the past are condemned to repeat it". You see, what I glean from the poem is that even though we try to protect our children by glossing over the bad parts of life and hiding behind our picket fences and nice flower beds, they can still fall prey to the darker side of human nature. ...read more.

(Conclusion) In conclusion, both of the poems effectively show problems affecting modern societies not only in America, but also around the world. People like the "History Teacher" try to sugar coat the past and hope that if the children do not know about it, they will not do it. The person in the second poem hopes to get good grades by relying on technology to solve all of the problems. However, the truth is that one needs to learn and know the facts, and not just believe everything that you are told. You need to become sceptical to a certain extent before you are able to truly understand life and your surroundings. Poetry is not particularly effective as a shock-treatment compared to the TV, cinemas or even multimedia. However, phrases and words interpenetrate life because they continue to serve some vital need. It is society which supports such needs that requires to change, not the other way around. If poetry is to be largely "a slice of life", then poetry needs to defend itself against the stronger claims of films and novels. If it is something else, then that purpose needs to be thought through as while poetry can certainly be written without poetry diction, it is immeasurably the poorer of it. ...read more.