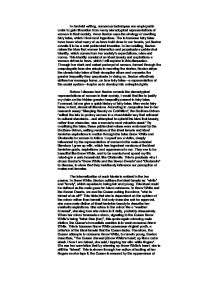 In feminist writing, numerous techniques are employed in order to gain liberation from many stereotypical representations of women in their society. Anne Sexton uses the strategy of rewriting fairy tales, which I find most ingenious.

In feminist writing, numerous techniques are employed in order to gain liberation from many stereotypical representations of women in their society. Anne Sexton uses the strategy of rewriting fairy tales, which I find most ingenious. The is because fairy tales have been what many of us have held close to our hearts, yet Sexton unveils it to be a cold patriarchal invention. In her retelling, Sexton raises the idea that women internalize and perpetuate a patriarchal identity, which comes from her society's expectations, rules and norms. This identity consist of an ideal beauty and aspirations a woman strives to have, which I will explore in this discussion. Through her stark and naked portrayal of women, formed through the unapologetic tone she adopts in narrating the stories, Sexton strips the classic fairy tales of their deceptive allure and unmasks the gender inequality they perpetuate. In doing so, Sexton effectively strikes her message home, on how fairy tales-a representation of the social system-inspire us to develop into uninspired girls. Before I discuss how Sexton reveals the stereotypical representations of women in their society, I would first like to justify my claim on the hidden gender inequality present in fairy tales. Foremost, let me give a quick history of fairy tales. Men wrote fairy tales, in fact, almost all literature. According to Jacqueline law in her research essay "Sleeping Beauty on Exhibition", the Brothers Grimm "edited the tale to portray women in a chauvinistic way that adhered to cultural standards...and attempted to uphold the idea that beauty, rather than character, was a woman's most valuable asset." By modifying the tales, these patriarchal values were endorsed by the Brothers Grimm, setting versions of the ideal female and ideal feminine aspirations in motion through the tales Snow White and Cinderella for women to follow. ...read more.

Indeed, Sexton in her retelling of Cinderella exposes the ideal feminine aspiration, which is be chosen to be the 'lucky' one, to gain fulfillment in life, particularly through marriage. In Cinderella, Sexton outlines what I call the "American dream", where women, being conditioned through literature and culture, believe in the "rags to riches" stories. Many women hardly work and dreams of marriage to a partner one day, which will determine her ultimate social position, happiness and fulfillment in life. In her lengthy prologue, Sexton reiterates the stories we "always read about". These stories, in a male dominated literature, inspire people to gain success and fulfillment without hard work, such as, "from toilets to riches", "From diapers to Dior" and "from mops to Teller". She repeats at the end of each stanza, "that story". Indeed, "that story", women are familiar with because of the literature we are exposed and influenced by as we grow up. Sexton herself is familiar with it, for in her the Paris Review she states, "until i was twenty-eight i had a kind of buried self who didn't know she could do anything but make white sauce and diaper babies. I didn't know i had any creative depths. I was a victim of the American dream, the bourgeois, middle-class dream. All I wanted was a little piece of life, to be married, to have children.... I was trying ... to lead a conventional life, for that was how I was brought up, and it was what my husband wanted of me". Due to the influence of this cultural mindset, Sexton herself once pursues the American dream, which is to be married and lead a conventional life, to be rather uninspired and unconfident. ...read more.

For example, she uses disdainful and unapologetic images such as the vacant-eyed and vacant mind motif of dolls to explicitly show us how women are objectified in a patriarchal system as discussed earlier. She also chooses to put a prologue before the stories, which we keep in mind as we read her rewriting of the fairy tale following it. Even though the tales are transcended through time through the use of the word "once", her tone remains, which is a very important and significant factor as her cynical, stark and apologetic tone, such as calling Snow White "dumb bunny" or the sarcastic remark that "the bird is important.. so heed him" constantly halts the magical allure of fairy tales and their true misogynistic nature. To conclude, Sexton in her rewriting of Snow White and the Seven Dwarfs, reveals two significant patriarchal values contributing to the patriarchal identity that women internalized and perpetuated through linage, which are ideal beauty and ideal aspirations. These have been internalized to the point where the female not only objectified themselves, she may also, allow me to claim, lose herself, for she willingly consumes a heart or slice off a body part. Those gory imageries women engage in serves to shock us; to see the extent to which women internalized the patriarchal identity. Not only have the female internalized it, she perpetuated the values of the patriarchal identity, through female linage. Therefore, Sexton, in her retellings, defamiliarizes what we are familiar with and deconstructed what many of us believed and accepted as we grew up. She lets us know that by wanting to be fair and relying on the male, we are being unfair to ourselves. ...read more.