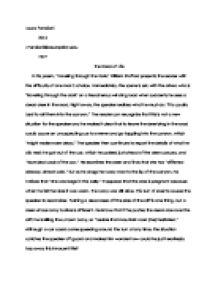 In his poem, &quot;Traveling through the Dark,&quot; William Stafford presents the reader with the difficulty of one mans choice.

Laura Pandiani 2013 [email protected] 1977 The Road of Life In his poem, "Traveling through the Dark," William Stafford presents the reader with the difficulty of one man's choice. Immediately, the scene is set, with the driver, who is "traveling through the dark" on a treacherous winding road when suddenly he sees a dead deer in the road. Right away, the speaker realizes what he must do: "It is usually best to roll them into the canyon." The reader can recognize that this is not a new situation for the speaker and he makes it clear that to leave the deer lying in the road could cause an unsuspecting car to swerve and go toppling into the canyon, which "might make more dead." The speaker then continues to report the details of what he did next: he got out of the car, which he parked just ahead of the deer carcass, and "stumbled back of the car." He examines the deer and finds that she has "stiffened already, almost cold." But as he drags her body over to the lip of the canyon, he notices that "she was large in the belly." ...read more.

This may be true for the safety of other cars and people, but symbolically the reader sees it is necessary to deal with this problem so one can continue on their path in life. The canyons with the river at the bottom could symbolically represent a way to wash all our problems away. By just pushing the deer over the edge and not hesitating, one is getting rid of this problem without letting these troubles hold them back. Another way the decisions made when stopping along the road of life are symbolized is through Stafford's use of language. The word "swerving" is used twice in the poem. When explaining why the man should move the deer, Stafford writes, "to swerve might make more dead." This also could symbolically refer to a swerve in judgment. If the speaker makes a swerve in his decision, it has consequences which may cause problems or even death. The second time Stafford uses "swerve," it is more clear that he is referring to judgment. He says, "I thought hard for us all - my only swerving." Because the deer is pregnant, the man's decision is extremely difficult, and he hesitates to think. ...read more.

In just a few lines the poem is able make the reader think hard and wonder what they would do. Is it fair to say that technology and the growth of humankind are more important than preserving wildlife? It is a dark road we travel, hoping to make good decisions that will lead us on the right path. "Traveling through the Dark" By: William Stafford Traveling through the dark I found a deer dead on the edge of the Wilson River road. It is usually best to roll them into the canyon: that road is narrow; to swerve might make more dead. By glow of the tail-light I stumbled back of the car and stood by the heap, a doe, a recent killing; she had stiffened already, almost cold. I dragged her off; she was large in the belly. My fingers touching her side brought me the reason-- her side was warm; her fawn lay there waiting, alive, still, never to be born. Beside that mountain road I hesitated. The car aimed ahead its lowered parking lights; under the hood purred the steady engine. I stood in the glare of the warm exhaust turning red; around our group I could hear the wilderness listen. I thought hard for us all--my only swerving--, then pushed her over the edge into the river. ...read more.