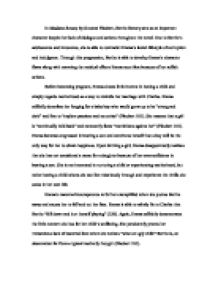 In Madame Bovary by Gustave Flaubert, Berthe Bovary acts as an important character despite her lack of dialogue and actions

In Madame Bovary by Gustave Flaubert, Berthe Bovary acts as an important character despite her lack of dialogue and actions throughout the novel. Due to Berthe's adolescence and innocence, she is able to contradict Emma's lavish lifestyle of corruption and indulgence. Through this progression, Berthe is able to develop Emma's character flaws along with narrating the residual effects Emma must face because of her selfish actions. Before becoming pregnant, Emma shows little interest in having a child and simply regards motherhood as a way to rekindle her marriage with Charles. Emma selfishly describes her longing for a baby boy who would grow up to be "strong and dark" and free to "explore passions and countries" (Flaubert 101). ...read more.

She is not interested in nurturing a child or experiencing motherhood, but rather having a child whom she can live vicariously through and experience the thrills she seeks in her own life. Emma's maternal incompetence is further exemplified when she pushes Berthe away and causes her to fall and cut her face. Emma is able to calmly lie to Charles that Berthe "fell down and hurt herself playing" (220). Again, Emma selfishly demonstrates the little concern she has for her child's wellbeing. She persistently proves her tremendous lack of maternal love when she notices "what an ugly child" Berthe is, an observation far from a typical motherly thought (Flaubert 225). ...read more.

Emma's struggle to accomplish her romantic ideals is emphasized by the fact that the only way for her to pursue her passion for Rodolphe is to take a reminder of her connection to Charles. Rather than working to make Berthe's life better, Emma greedily decides to drag Berthe along with her in order to achieve her own immoral desires. Berthe's presence is vital to the novel because she is used to develop the main character, Emma. Emma's atrocious attributes are only portrayed when she is contrasted with Berthe's innocence and placed in a position where her maternal inability identifies her selfishness and immorality. Without Berthe, Emma's character would not be accurately portrayed and the effects of her lifestyle upon those who truly love her would go unrecognized. ?? ?? ?? ?? ...read more.