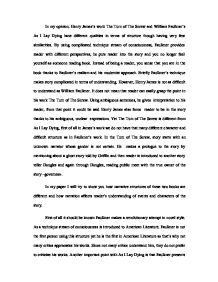 In my opinion, Henry Jamess work The Turn of The Screw and William Faulkners As I Lay Dying have different qualities in terms of structure though having very few similarities.

In my opinion, Henry James's work The Turn of The Screw and William Faulkner's As I Lay Dying have different qualities in terms of structure though having very few similarities. By using complicated technique stream of consciousness, Faulkner provides reader with different perspectives, he puts reader into the story and you no longer feel yourself as someone reading book. Instead of being a reader, you sense that you are in the book thanks to Faulkner's realism and his modernist approach. Briefly Faulkner's technique makes story complicated in terms of understanding. However, Henry James is not as difficult to understand as William Faulkner. It does not mean that reader can easily grasp the point in his work The Turn of The Screw. Using ambiguous sentences, he gives interpretation to his reader, from that point it could be said Henry James also force reader to be in the story thanks to his ambiguous, unclear expressions. Yet The Turn of The Screw is different from As I Lay Dying, first of all in James's work we do not have that many different character and difficult structure as in Faulkner's work. In the Turn of The Screw, story starts with an unknown narrator whose gender is not certain. He makes a prologue to the story by mentioning about a ghost story told by Griffin and then reader is introduced to another story teller Dougles and again through Dougles, reading public meet with the true owner of the story -governess-. ...read more.

Addie cheats her husband but reader cannot learn the facts easily. It is a narrative style which puts reader into prison and makes him/her looking for an escape. Another important point with As I Lay Dying is there is not any character development, action or a classical happy ending. In this story, centre is the dead woman Addie Bundren which is also interesting. Even though she is dead, it is explicitly written there, Addie could be the base of the story. In the book everything is same, while they carry the coffin they always do the same things, always trying to pass bridge it is as if there is a circle and they have to do it. According to my point of view, through this pattern Faulkner shows his reader the structure of life. Thanks to his structure he offers reader that there is always a pattern in life, all the time people lives the same things and there is a truth of nothingness in life. In family's journey to Jefferson reader could grasp it in the things happening there. So what happens? Nothing..Anse find a woman again and it is already known same things will happen again. I think the book is perfect in terms of structure though becoming difficult to understand. It is the tale of life. How many writers could tell the life in his book just in a perfect way? Faulkner is incredible not just because his understanding about life but because his way of telling life in its structure. ...read more.

Reading the Turn of The Screw requires much attention. James's style must be forcing reader's brain as in As I Lay Dying .Even the end of The Turn of The Screw is ambiguous as if it is not the end at least it should not be. Reader cannot get his answers. While reading it, I personally feel that I will get my answers but after finishing I feel James awakens curiosity to make reader finish and becoming his style he again teases his reading public. Again I can say that The Turn of The Screw is not like traditional novel structure, reader does not know any Jane Eyre and a character development, and it is a tale ending with ambiguity. In terms of structure The Turn of The Screw and As I Lay Dying are not so different but not so similar as well. In both books there is different telling of stories but Faulkner's As I Lay Dying is difficult to get for reader -being really boring-.However The Turn of The Screw leaves reader questions, which make reader to wonder, to be answered or commented. And all these make this book worth to reading. Yet it is not valid for Faulkner's story because actually nothing is happening in the story. Though I appreciate Faulkner's style as a literature student, just like critics in his time I would not want to read and criticize it. However, I find his style innovative, perfect and necessary for the literature. Beyond question, his style leads American Literature to a new dimension. ...read more.