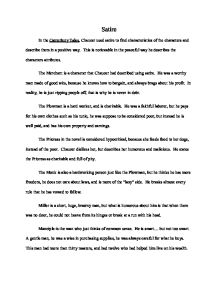 In the Canterbury Tales, Chaucer used satire to find characteristics of the characters and describe them in a positive way. This is noticeable in the peaceful way he describes the characters attributes.

Satire In the Canterbury Tales, Chaucer used satire to find characteristics of the characters and describe them in a positive way. This is noticeable in the peaceful way he describes the characters attributes. The Merchant is a character that Chaucer had described using satire. He was a worthy man made of good wits, because he knows how to bargain, and always brags about his profit. In reality, he is just ripping people off, that is why he is never in debt. The Plowman is a hard worker, and is charitable. He was a faithful laborer, but he pays for his own clothes such as his tunic, he was suppose to be considered poor, but instead he is well paid, and has his own property and earnings. ...read more.

He breaks almost every rule that he has vowed to follow. Miller is a short, huge, brawny man, but what is humorous about him is that when there was no door, he could not heave from its hinges or break at a run with his head. Manciple is the man who just thinks of common sense. He is smart... but not too smart. A gentle man, he was a wise in purchasing supplies, he was always careful for what he buys. This man had more than thirty masters, and had twelve who had helped him live on his wealth. The Oxford Cleric always thinks logic, he was not that skinny, but serious, and like to buy a lot of books. ...read more.

Reeve is a scrawny looking man, and many people feared him, because he knew so much. He was also considered rich, since his house was not that bad, it was in a meadow, a place where people do not get mad. Reeve was talented in many ways, a good trader, craftsman, and carpenter, and was always ridden last in the company. And finally, the Friar. He always wanted to be married. He had so many opportunities, but that he denied them all. A very dignified man indeed, and also well beloved, but just did not take the chance. As you can see, Chaucer used satire to describe the characters traits because this was his way of writing. He is always polite and respectful by the way he describes these characters with his techniques. ...read more.