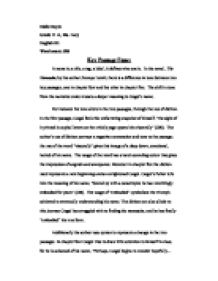 In the novel, The Namesake, by the author Jhumpa Lahiri, there is a difference in tone between two key passages, one in chapter four and the other in chapter five. The shift in tone from the narrative voice reveals a deeper meaning to Gogols name.

Eddie Royle Grade 11 A, Ms. Lacy English HL Word count: 826 Key Passage Essay A name is; a title, a tag, a label, it defines who one is. In the novel, The Namesake, by the author Jhumpa Lahiri, there is a difference in tone between two key passages, one in chapter four and the other in chapter five. The shift in tone from the narrative voice reveals a deeper meaning to Gogol's name. For instance the tone alters in the two passages, through the use of diction. In the first passage, Gogol feels this unflattering snapshot of himself, "the sight of it printed in capital letters on the crinkly page upsets him viscerally" (300). The author's use of diction portrays a negative connotation and tone to the passage; the use of the word "viscerally" gives this image of a deep down, emotional, hatred of his name. ...read more.

The author uses abrupt, concise sentences to transmit this anxiousness and worry that Gogol feels. The repeating of the word "perhaps" again shows us the nervousness that Gogol feels as well as giving a rhythmic effect to the writing. Within the second passage, the syntax has transformed, "And suddenly his pet name, uttered by his father as he has been accustomed to hearing all his life, means something completely new..." (337-38). The structure of this passage's sentences has now changed; the missing pieces of the puzzle that Gogol could not find have finally matched up. The author's use of this parallel structure illustrates this coming of age, realising his names meaning. Moreover it incorporates a rhyme and certain positive tone to it. The parallel structure additionally adds passion to what Gogol feels, as if an excited child blurts out how thrilled and excited he is for his birthday. ...read more.

Gogol's father explains why he was named Gogol, "you remind me of everything that followed" (338). Throughout this passage it has this tone that is relief and a sense of moving forward. Gogol reminds his father of everything that happened after the crash, and in a way the author has left a key purpose to Gogol's name, but it leaves the reader wanting more. Gogol has now realised his name, but one wants to know what he'll do, will he accept his name and become who he is, or take a different path. The author's use of "followed" provides an implication that the story continues, and there is more to come. As a result, one does see the shift in tone from the narrative voice that exhibits a profound significance to Gogol's name. The author, Jhumpa Lahiri shows some noticeable attributes to convey a deeper meaning to Gogol's name, such as diction, syntax and foreshadowing. Words have meaning and names have power. ...read more.