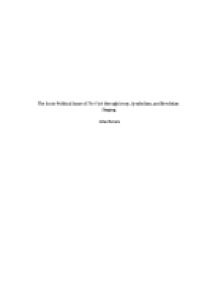 In The Visit, Friedrich Durrenmatt uses irony and theatrical devices to convey the corruption of the town through greed and power of money

﻿The Socio-Political Issue of The Visit through Irony, Symbolism, and Brechtian Staging. John Brown In The Visit, Friedrich Durrenmatt uses irony and theatrical devices to convey the corruption of the town through greed and power of money. Durrenmatt uses irony to show how the want for instant wealth can lead to the corruption of the entire town, mainly by the degrading of the ethical standards of the citizens. The alienation effect proclaims these issues in a way so that the audience can reflect on the issues and physically know it is a play. The examples of Claire using money to basically control the whole town makes it easier for the audience to tell that?s it?s a play. The viewers are able to understand the real concerns of the play and the problems within the plot because of the Alienation effect. Durrenmatt uses Irony to express the corruption within the citizens and the corruptive power of money. In the play, the citizens thought the money would ransom them from the decay of the town, but what eventually happens is that the greed of the town leads them to an ethical disaster, instead of the town progressing by their own means. Justifying this claim the mayor says in his speech, ?We would rather have poverty than blood on our hands? (Durrenmatt 39). ...read more.

Yet, this ?thin veneer of morality is quickly stripped away in the face of?(Durrenmatt Handout 4) greed, which ultimately results in the destruction of the community. Claire?s physical features were ironic to the amount of power she had. Claire has a prosthetic leg and hand, which symbolizes that she, could never die. These physical features portray her shrewd but powerful ways of manipulating the town through the power of money and how she always gets what she wants. Durrenmatt presents the issues that arise from the corruptive power of money with the use of irony. The moment when Claire bent over the balcony that had an overview of Guellen is ironic because Claire has prosthetic parts yet she holds the symbol of hierarchy and power. In the play, Claire promotes her own sense of 'justice' with money, when she strikes a deal with the town of Guellen. She essentially weighs the value of one person, Ill, over a great sum of money that would go towards the town and its people. With the use of Brechtian staging, Durrenmatt causes the audience to reflect on the issues in the play. Durrenmatt also implements this alienation effect with the use of stock characters. Rather than identifying characters by name, characters are known solely by their general profession, which includes the Mayor, Policeman, and Priest. ...read more.

A moment ago, you wanted time turned back, in that wood so full of the past, where we spent our young years. Well I?m turning it back now, and I want justice. Justice for a million.? It?s clear throughout the play Claire wants to get back at Ill for all the suffering he caused her, but the fact she?s using money to achieve justice contributes towards the theme that, can justice be bought? Throughout the play Claire persistently tries to get the town to fall for the money to take out Ill, and soon enough the town clandestinely did. Claire?s will to kill someone is revenge, not justice, and the action of offering a million for Ill?s death. The corruption in the society is a bond that gets stronger as the town spends money and as time passes on anxiously waiting for Ill?s doom. With irony and Brechtian staging, Durrenmatt conveys the corruptive power of money in The Visit. By addressing the theme through irony and allocating the consequences and issues that arise from it with the use of Brechtian staging effects, the audience is able to learn and reflect from these issues, and can, thus, create ?a real-world impact?(Brechtian Alienation Handout 3). Although money helps the with the progression of a society materially, The Visit warns how its corruptive power can ultimately cause the collapse of the moral principles by which a society is originally built and how in Claire?s case that money could buy justice in a society. ...read more.