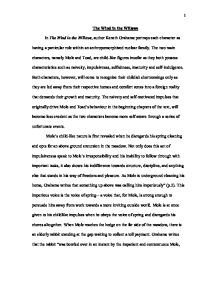 In The Wind in the Willows, author Keneth Grahame portrays each character as having a particular role within an anthropomorphized nuclear family.

The Wind in the Willows In The Wind in the Willows, author Keneth Grahame portrays each character as having a particular role within an anthropomorphized nuclear family. The two main characters, namely Mole and Toad, are child-like figures insofar as they both possess characteristics such as naiveity, impulsivness, selfishness, imaturity and self-indulgence. Both characters, however, will come to recognize their childish shortcomings only as they are led away from their respective homes and comfort zones into a foreign reality that demands their growth and maturity. The naivety and self-motivated impulses that originally drive Mole and Toad's behaviour in the beginning chapters of the text, will become less evedent as the two characters become more self aware through a series of unfortunate events. Mole's child-like nature is first revealed when he disregards his spring cleaning and opts for an above ground excursion in the meadow. Not only does this act of impulsiveness speak to Mole's irresponsibility and his inability to follow through with important tasks, it also shows his indifference towards structure, discipline, and anything else that stands in his way of freedom and pleasure. As Mole is underground cleaning his home, Grahame writes that something up above was calling him imperiously" (p.2). ...read more.

While in isolation, Grahame explains that Toad "would arrange bedroom chairs in rude resemblance of a motor-car and would crouch on the foremost of them, bent forward and staring fixedly ahead, making uncouth and ghastly noises, till the climax was reached, when, turning a complete somesault, he would lie prostrate amidst the ruins of the chairs, apparently completely satisfied for the moment" (104). Such behavior that attempts to recreate reality through a series of make-believe actions is characteristic of a spoilt child who is unaware of their own immaturity and delusions. Toad continues to act like a child during his escape from the Wide World. After he has gone through the ordeal of escaping prison, disguising himself as a washer woman, stealing and selling a barge-woman's horse, he recounts these events with conceit: "They pursue me with engines, and policemen, and revolvers; I snap my fingers at them, and vanish laughing into space. I am, unfortunately, thrown into a canal by a woman, fat of the body and very evil-minded. What of it? I swim ashore, I seize her horse, I ride off in triumph, and I sell the horse for a whole pocketful of money and an excellent breakfast...I am the Toad, the handsome, the popular, the successful, Toad!" ...read more.

Ultimately, he sees the request at the banquet as a massive act of kindness and forgiveness, to which he is obliged to respond by simply "shaking his head gently, raising one paw in mild protest, and...managing to convey to them that this dinner was being run on strictly conventional lins" (241). Grahame also writes of Toad, "after due consultation with his friends, he selected a handsome gold chain and locket set with pearls, which he dispatched to the gaoler's daughter with a letter that even badger admitted to be modest, grateful, and appreciative; and the engine driver, in his turn, was properly thaned and compensated for all his pains and trouble" (241). These gestures of compensation speak to Toads newly developed maturity insofar as he is now able to reach outside himslef and treat others the way he expects to be treated. Clearly, Mole and Toad mature from child-like characters to more self-aware and responsible individuals throughout the The Wind in the Willows. Through pain and suffering Mole and Toad learn responsibility and accountability. Mole learns to respect Rat and Badger and reward each for his wisdom and discipline, while Toad learns humility and then experiences forgivness. In fact, all the animals in the Wind in the Willows become less child-like only as they learn to listen to one another and share in the gift of friendship. 1 ...read more.