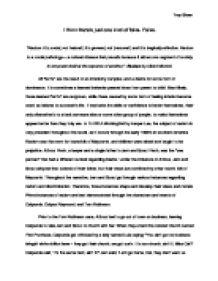 In To Kill A Mockingbird by Harper Lee, the subject of r****m is very prevalent throughout the novel, as it occurs through the early 1900s in southern America.

I think there's just one kind of folks. Folks. "r****m: It is social, not 'natural'; it is general, not 'personal'; and it is tragically effective. r****m is a social pathology- a cultural disease that prevails because it allows one segment of society to empower itself at the expense of another," -r****m by Albert Memmi. All "ism's" are the result of an inferiority complex, and a desire for some form of dominance. It is sometimes a learned behavior passed down from parent to child. Most-likely, those learned "ism's" are outgrown, while those caused by some form of feeling inferior become worst as failures to succeed in life. If one lacks the skills or confidence to better themselves, their only alternative is to attack someone else or some other group of people, to make themselves appear better than they truly are. In To Kill A Mockingbird by Harper Lee, the subject of r****m is very prevalent throughout the novel, as it occurs through the early 1900's in southern America. r****m was the norm for townsfolk of Maycomb, and children were raised and taught to be prejudice. Atticus Finch, a lawyer and a single father to Jem and Scout Finch, was the "one percent" that had a different outlook regarding blacks. ...read more.

He can't help himself, that's why he lives the way he does." - (Page 268). Mr. Raymond lives a double lifeto cover his feelings for black women. He goes head first against society with his choices in regards to his personal life. Within a r****t and segregated society, he has chosen to be with and have children with a black woman. Mr. Raymond pretends to drink so that others will avoid him, rather than causing uproar in the town. Believing him to be a drunk, they assume that his verboten "ludicrous poor choice" in his relationship is a result of his drunkenness. He comes from a very good white family, but he has to go so low to find desire and fulfillment from his black mistress. His white mistress even got pregnant and gives birth to children, so it is right to say that she is his second wife. In fact, his white wife hadn't made an official divorce with him, so he was still legally married. So, Dolphus Raymond had actually committed bigamy, which is a serious offense and against the law of conduct. A mantrapped in a system that won't let a man make his own choices. He simply prefers black people to whites. ...read more.

A white man's word was always taking over a black man. No matter how low class or trashy a white man was, blacks were on the low of the social hierarchy. Calpurnia, Dolpus Raymond, and Tom Robinson tremendously presented preeminent representations of r****m and discrimination through their characters and predicaments. Calpurnia brought Jem and Scout to First Purchase only to be shunned by Lula. Furthermore, Calpurnia is treated to be a slave by Aunt Alexandra. In like manner, Dolphus Raymond deceived the whole town to believe that he was a drunk, due to dissent, so to live his double life with a black woman was made possible. Comparatively to Dolphus Raymond, Mayella's l**t for Tom Robinson was not acceptable, which led to the beating of her by her father. Although Atticus had a strong defense, Bob Ewell's word was taken over a black man's word; no matter how trashy Bob was. By Jem and Scout living through those various experiences concerning r****m and discrimination, those instances shaped and developed their views and morals. From the start of children, these cultural diseases will not prevail and will not, at the expense of another, allow one segment of society empower itself. ?? ?? ?? ?? Troy Sloan ...read more.