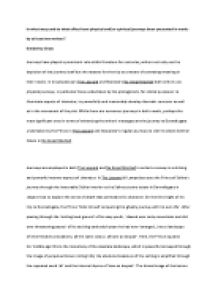 In what ways and to what effect have physical and/or spiritual journeys been presented in di Lampedusas The Leopard and Macleods No Great Mischief?

﻿In what ways and to what effect have physical and/or spiritual journeys been presented in works by at least two writers? Kimberley Chow Journeys have played a prominent role within literature for centuries; writers not only use the depiction of the journey itself but the reasons for the trip as a means of conveying meaning in their novels. In di Lampedusa?s The Leopard and Macleod?s No Great Mischief both writers use physical journeys, in particular those undertaken by the protagonists, for similar purposes: to illuminate aspects of character, to powerfully and memorably develop thematic concerns as well as in the movement of the plot. While there are numerous journeys in both novels, perhaps the most significant ones in terms of enhancing the writers? messages are the journey to Donnafugata undertaken by the Prince in The Leopard and Alexander?s regular journeys to visit his eldest brother Calum in No Great Mischief. Journeys are employed in both The Leopard and No Great Mischief in order to convey in a striking and powerful manner aspects of character. In The Leopard di Lampedusa uses the Prince of Salina?s journey through the inexorable Sicilian interior to the Salina country estate in Donnafugata in chapter two to explore the sense of death that permeates his character. On the third night of his trip to Donnafugata, the Prince ?finds himself comparing this ghastly journey with his own life?. ...read more.

As Alexander describes in first person narration, they are like ?two tired boxers? Each giving and seeking the support of the other? and by visiting the decrepit backstreets of Toronto Alexander embarks, through the route of memories which Calum evoke, on a journey of self-discovery. In both novels, the physical journeys undertaken by the protagonists are in fact representative of spiritual journeys. While the arduous and ?funereal? trip to Donnafugata is representative of the Prince?s slow but steady movement towards death, the journey made by Alexander from the ?quiet affluence of his home? to visit his brother symbolises his yearning to reconnect with his family?s traditional past, and in doing so to gain a greater understanding of himself. Journeys are not only employed to vividly reveal aspects of character but are also used to invoke a subtle discussion of the writer?s thematic concerns. Di Lampedusa uses the journey through the harsh Sicilian landscape in order to portray the ephemeral insignificance of mortal concerns when compared to the timeless power of the natural landscape. The use of the third person omniscient narrator to describe the journey has the effect of distancing the reader from the characters, ultimately diminishing the Salina family to ?perspiring faces? against the ?blazing landscape?. Depicted as ghostly figures ?white with dust to the eyebrows? the Prince and his family are reduced to anonymity and it is the hellish landscape of ?bare hillsides? and ?desiccated trees? that dominates the journey. ...read more.

In The Leopard the journey in the second chapter facilitates the transition in setting from Palermo to Donnafugata, directly leading to the introduction to Angelica, representative of the rising bourgeoisie class, and her subsequent engagement to Tancredi, the Prince?s nephew. As much of the novel?s plot is concerned with the union between the middle class and aristocracy, the journey to Donnafugata can be seen as a catalyst for this pivotal point in the text. Both writers use journeys to impel the movement of the plot; however, in No Great Mischief Alexander?s frequent drives to Toronto form the ?backbone? of the novel from which his reflections on the past branch while in The Leopard, the Prince?s journey to Donnafugata acts as catalyst for the introduction to Angelica, an event which is crucial to the decline of the Salina family. Though The Leopard is set during the political and social upheaval of the Italian Risorgimento and No Great Mischief spans several centuries of history in Scotland and Canada, di Lampedusa and Macleod both employ physical journeys in their novels in a powerful and memorable way. The overbearing and funereal landscape of Sicily as well as the ?splendid autumn sunshine? that glimmers over the destitute apartment block in which Calum lives are images that resonate powerfully within the mind of the reader, enabling the writers to convey in a striking manner nuances in their protagonists? character as well as in their thematic concerns. ...read more.