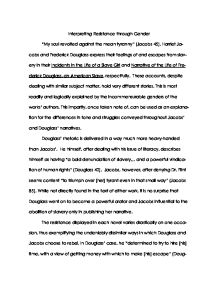 Interpreting Resistance through Gender "My soul revolted against the mean tyranny" (Jacobs 45). Harriet Jacobs and Frederick Douglass express their feelings of and escapes from slavery in their Incidents in the Life of a Slave Girl and Narrative of the Life of Frederick Douglass, an American Slave, respectfully. These accounts, despite dealing with similar subject matter, hold very different stories. This is most readily and logically explained by the incommensurable genders of the works' authors. This imparity, once taken note of, can be used as an explanation for the differences in tone and struggles conveyed throughout Jacobs' and Douglass' narratives. Douglass' rhetoric is delivered in a way much more heavy-handed than Jacobs'. He himself, after dealing with his issue of literacy, describes himself as having "a bold denunciation of slavery... ...read more.

While both of these feats are admirable, they are both distinguished in the nature of the motivation that enabled them, and the enabler itself. The reason for this is very likely at cause of each author's gender. Jacobs' ultimate impetus throughout most of her narrative is her family. She was nerved to immediately begin formulating her escape from Dr. Flint's plantation when she learned that her children "were to be brought to the plantation to be 'broke in'" (Jacobs 144), for example. What is more, Jacobs' main apparatus of her eventual complete escape is her grandmother's attic, which was an effective "place of concealment" (Jacobs 172). Had she been without this instrument, her fate's journey would have been much riskier. Douglass, on the other hand, relies mainly on himself, using others merely in order to conquer his obstacles. While learning to read, for instance, he employed both Mrs. ...read more.

Douglass' quest for literacy is an admittedly selfish goal, ignoring its repercussions on later events in his life, and is in that respect very unlike Jacobs' struggle for her and her children's freedom. However, this is not to say that gender was the only determinate of each author's motivation. Had Douglass been female and Jacobs male, this distinction would still be applicable, albeit less conventional. The role gender plays in the reading of both narratives simply leads to a greater depth of character study. Although gender could or could not arguably have much of an effect on a person, the stereotypes commonly associated with each can lead to greater understanding. However, after considering this, it is important to remember that a great deal of those new perceptions may be superficial. A reader should be careful to ignore any apocryphal judgments he or she may have made, and use the corresponding genders merely as a differentiation of Douglass' and Jacobs' respective personalities. ...read more.