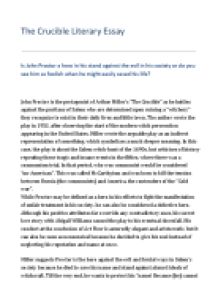 Is John Proctor a hero in his stand against evil in his society or do you see him as a foolish when he might have easily saved his life?

﻿The Crucible Literary Essay ________________ Is John Proctor a hero in his stand against the evil in his society or do you see him as foolish when he might easily saved his life? John Proctor is the protagonist of Arthur Miller?s ?The Crucible? as he battles against the puritans of Salem who are determined upon ruining a ?witchery? they recognize to exist in their daily lives and little town. The author wrote the play in 1953, after observing the start of the modern witch persecution appearing in the United States. Miller wrote the arguable play as an indirect representation of something, which symbolizes a much deeper meaning. In this case, the play is about the Salem witch-hunt of the 1690s, but criticizes of history repeating these tragic and insane events in the fifties, where there was a communism trial. In that period, who was communist would be considered ?un-American?. This was called McCarthyism and was born to kill the tension between Russia (the communists) and America, the contenders of the ?Cold war?. While Proctor may be defined as a hero in his efforts to fight the manifestation of unfair treatment in his society, he can also be considered a defective hero. ...read more.

All the court wants to put him in the responsibility of judging. However, he ?speaks [his] own sins; [he] cannot judge another. [He] has no tongue for it? (P113). Miller, in this phrase, uses the role of Proctor as the ?complainer? against the idea of judging. In these protagonist?s few phrases the author intention is to say that the position of evaluating someone, on the good or bad side, is neither Proctor?s role nor Danforth?s. Only God has the right to say His opinion on others. Proctor is supporting this point and opposing against theocracy and the judges in the courtroom. On the other hand he might well be seen as foolish because he might had easily saved his life. He would have lived with his wife and children a happy life, possibly. Even though he would have lost his authority of sympathy and respect that he gained through the population of Salem, he would have left his wife pregnant on her own. ?Mr Proctor, have you seen the devil in your life? ... I did? (P111). In this quote, Miller made Proctor confess to make the reader think that the farmer did the right choice to sacrifice his name for his wife and children. ...read more.

As it stood, the protagonist did not tell the truth until it was too late, therefore costing many innocent souls, including his own. Following on, what caused the story to his eventual downfall was his affair with Abigail Williams. The girl accused blameless people of witchery in order to competently eliminate and erase Proctor?s wife Elizabeth from his life, supposing that if the farmer did not have his wife he would love Abigail instead. ?[Elisabeth] is blackening my name in the village! ? She is a cold snivelling woman, and you bend to her!? (P19) To finish, John Proctor is a honourable of his acknowledgement as a hero, even if having a few imperfections. He can be considered a hero because he decided to get executed instead of bringing dishonour upon himself and to the other prisoners. However, his major imperfection is his pride and the obsession with his fine name and account. If he had confessed to adultery, right at the start, maybe the whole event could have been avoided. John Proctor is not also a fool; even though what he does may appear so at the start, there are also other justifications behind his actions. His pride may be defined foolish, but the protagonist himself is not a nonsensical man. ...read more.