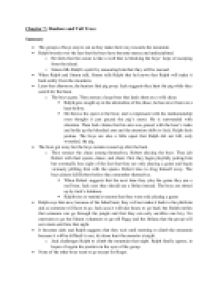 Lord of the Flies Summary and Analysis of Chapters 7,8,9 and 10

Chapter 7: Shadows and Tall Trees Summary * The groups of boys stop to eat as they make their way towards the mountain. * Ralph broods over the fact that the boys have become messy and undisciplined. o He feels that the ocean is like a wall that is blocking the boys' hope of escaping from the island. o Simon lifts Ralph's spirit by reassuring him that they will be rescued. * When Ralph and Simon talk, Simon tells Ralph that he knows that Ralph will make it back safely from the mountain. * Later that afternoon, the hunters find pig p**p. Jack suggests they hunt the pig while they search for the beast. o The boys agree. They pursue a large boar that leads them on a wild chase. * Ralph gets caught up in the adrenaline of the chase, he has never been on a hunt before. * He throws his spear at the boar, and is impressed with his marksmanship even thought it just grazed the pig's snout. He is surrounded with attention. Then Jack claims that his arm was grazed with the boar's tusks and holds up the bloodied arm and the attention shifts to Jack. Ralph feels jealous. The boys are also a little upset that Ralph did not kill, only wounded, the pig. * The boar got away but the boys remain wound up after the hunt. o They reenact the chase among themselves, Robert playing the boar. They jab Robert with their spears, dance, and chant. First they begin playfully poking him but eventually lose sight of the fact that they are only playing a game and begin viciously jabbing him with the spears. Robert tries to drag himself away. The boys almost kill Robert before they remember themselves. * When Robert suggests that the next time they play the game they use a real boar, Jack says they should use a littlun instead. ...read more.

o Jack sits like a king on a throne, his face is painted like a savage, he giving out orders, and is being waited on by boys that are acting as his servants. * After the large meal of pig, Jack invites all of Ralph's followers to join his tribe. o Most of them accept, even though Ralph attempts to discourage them. * It starts to rain and Ralph asks Jack how he plans to weather the storm since no shelters have been built. o Jack responds by ordering his tribe to do its hunting dance. * The boys are caught up in a kind of frenzy while they chant and dance in a couple of separate circles along the beach. o Even Ralph and Piggy are swept away by the excitement and dance on the outskirt of the group. o Again the boys reenact the hunting of the pig and reach a high pitch of hysteria. * The boys see a shadowy figure creep out of the forest, Simon. o In their wild state the boys don't recognize him. o They shout that he is the beast, * They attack Simon and start to tear him apart with their bare hands and teeth. * Simon tries desperately to explain what he saw and to remind them of who he is. Instead, he trips and plummets over the rocks onto the beach. * The boys fall on him violently and kill him. * The storm begins and the boys run for shelter. * The strong wind and waves wash Simon's broken corpse into the ocean. Where it drifts away, surrounded by glowing fish. * At the same time, the wind also blows the body of the parachutist off the mountain and onto the beach this sends the boys screaming into the darkness. Analysis **This chapter has a lot to do with Simon * Simon has changed greatly from his encounter with the Lord of the Flies/the beast. ...read more.

* When Golding uses irony in this chapter, the boundary between civilization and savagery is blurred. Also this implies that the two are more closely connected than the story has illustrated. * The boys' savagery brings about the rescue that their purposeful efforts were unable to achieve. When you lose hope, what you hoped for happens. * Although the naval officer saves Ralph, the ending of the novel is still not happy. o When the boys encounter the officer on the beach, they aren't leaping for joy. * The officer says that he can't understand how British lads could have acted with such poor form. o Ironically, this "civilized" officer is a part of an adult world in which violence and war go hand in hand with civilization and social order. o He reacts to the savage children with disgust, he's a hypocrite. * The children are so far removed from the civilized world in their psyche, that they do not instantly celebrate the officer's arrival. o They stand before him in shock. o Even Ralph, whose life has literally been saved by the ship's arrival, weeps tears of grief rather than joy. * "Ralph wept for the end of innocence, the darkness of man's heart, and the fall through the air of the true, wise friend called Piggy." * When Ralph sees the officer, his realization that he is safe and will be returned to civilization plunges him into despair. The rescue is not a moment of joy because Ralph realizes that, although he will not be killed on the island, he will never be the same. He has lost his innocence and learned about the evil that lurks within all human beings. Here there is a connection to the sources of Ralph's despair: the end of innocence and the presence of savagery in all human beings (two main themes of the novel. o For Ralph, as for the other boys, nothing will ever be the same, as it was before coming to the island. ...read more.