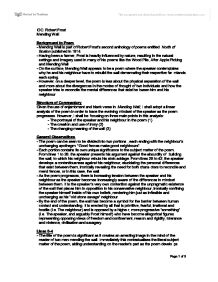 Mending Wall by Robert Frost. Given the use of enjambment and blank verse in Mending Wall, I shall adopt a linear analysis of the poem in order to trace the evolving mindset of the speaker as the poem progresses.

IOC: Robert Frost Mending Wall Background to Poem - Mending Wall is part of Robert Frost's second anthology of poems entitled North of Boston published in 1914 - Having been a farmer, Frost is heavily influenced by nature, resulting in the natural settings and imagery used in many of his poems like the Wood Pile, After Apple Picking and Mending Wall - On the surface, Mending Wall appears to be a poem where the speaker contemplates why he and his neighbour have to rebuild the wall demarcating their respective farmlands each spring. - However, on a deeper level, the poem is less about the physical separation of the wall and more about the divergences in the modes of thought of two individuals and how the speaker tries to reconcile the mental differences that exist between him and his neighbour Structure of Commentary Given the use of enjambment and blank verse in Mending Wall, I shall adopt a linear analysis of the poem in order to trace the evolving mindset of the speaker as the poem progresses. However, I shall be focusing on three main points in this analysis: - The portrayal of the speaker and his neighbour in the poem (1) - The creation and use of irony (2) - The changing meaning of the wall (3) General Observations - The poem can be seen to be divided into two portions, each ending with the neighbour's unchanging apothegm: "Good fences make good neighbours". - Each portion contains its own unique significance to the subject matter of the poem. From lines 1 to 26, the speaker presents his argument against the absurdity of building the wall, to which his neighbour rebuts his stoic addage. ...read more.

(2) - The reassertion of rhythmic uniformity of the first 4 lines in these 4 lines--10 syllables with an iambic meter--mimic the reassertion of the wall itself by the speaker and his neighbour, and the return to order and tradition. Through the interchanging use of different meters throughout the poem, Frost portrays the speaker to have a certain flexibility: While he unsettles walls, he also repairs; he is at once Apollonian and Dionysian; favouring both order and rebellion to the same extent. - At this juncture, the wall becomes a symbol of the mental barriers that exist between people (3) in addition to its literal representation of a wall dividing the farms of two farmers. While rebuilding the wall, the two men are walking on parallel paths, never to truly meet each other: "...we meet to walk the line and set the wall between us once again. We keep the wall between us as we go" (ll.14-16) The act of rebuilding the wall through closing the gaps in it, prevents the two men, the two minds from ever coming to a consensus. Frost shows this lack of consensus between the two men through the use of ambiguity and inconclusiveness throughout the entire poem. Lines 16-22 - This idea of parallelism and the idea that two individuals will never come to a shared conclusion is reiterated here of anaphora (the repetition of a word or phrasing): "To each the boulders... to each" (ll. 16) / "And some are loaves and some are so nearly b***s" (ll. 17). This is interestingly repeated throughout the poem: "Walling in or Walling out" (ll. 32) ...read more.

This brings to mind the speaker's earlier words, "We keep the wall between us as we go" (ll. 15) - The wall continues to take on its metaphorical meaning of a barrier between two individuals as tension builds up between the two characters in the poem. - The speaker becomes more contentious towards his neighbour saying, "I could say 'Elves' to him, but it's not elves exactly, and I'd rather he said it for himself." The speaker implies that his neighbour is stupid, thinking that he would be foolish enough to think that "Elves" were responsible for the wall's destruction. While some readings interpret this as an example of the neighbour's backwardness and "old-stone savage[ry]" as he is unable to appreciate the whimsy and light-heartedness of the notion, but it could simply be that the neighbour isn't curious about the reason behind the wall's disrepair, and the speaker is simply addressing an uninterested audience. (check validity) Lines 37-43 - In the concluding lines of the poem, the speaker finally decides to drop the issue about "Something there is that doesn't love a wall", and focuses instead on his neighbour, presenting a vivid and imaginative caricature of him as a "old-stone savage" that "moves in darkness". In doing so, the speaker frees himself from being confined to his pessimistic criticism and returns to his original role as a mere observer, leaving the poem inconclusive and the questions raised in the poem unanswered. - The repetition of "Good fences made good neighbours" shows the perpetuity of the differences between the speaker and his neighbour, who, at this point, have become allegorical representations of diametrically opposed views and ideas, destined to be parallel with each other, never to coincide. ?? ?? ?? ?? Page 4 of 5 Page 1 of 5 ...read more.