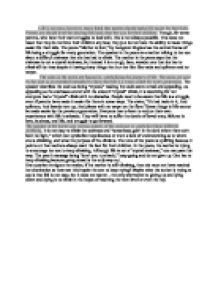 Mother to Son, by Langston Hughes has the central theme of life being a struggle for every generation.

Life is not easy; however, many think that parents should make life easier for their kids. Parents are should level the playing field and clear the way for their children. Though, for some parents, who have their own struggles to deal with, this is not always possible. This does not mean that they do not love their children any less; they just do not have the ability to make things easier for their kids. The poem "Mother to Son," by Langston Hughes has the central theme of life being a struggle for every generation. The speaker in the poem is a mother talking to her son about a difficult staircase that she has had to climb. ...read more.

The speaker describes the stairs as being "crystal," making the stairs seem unreal and appealing. As appealing as the staircases sound with the smooth "crystal" climb, it is deceiving for not everyone had a "crystal" climb with no obstacles. People need to be aware that life is a struggle, even if parents have made it easier for them in some ways. The stairs; "It's had tacks in it, And splinters, And boards torn up, And places with no carpet on the floor."Some things in life cannot be made easier by the previous generation. Everyone has to learn to endure their own experiences with life's setbacks. ...read more.

In the poem, the mother is trying to encourage her son to keep climbing. Although life is not a "crystal staircase," one can pave his way. The poet's message being "don't you turn back," keep going and do not give up. One has to keep climbing because going ahead is the only way out. One question intrigues the reader; if the mother is still climbing, then she must not have reached her destination so how can this inspire the son to keep trying? Maybe what the author is trying to say is that life is not easy, but it does not matter - the only alternative to giving up and lying down and dying is to climb in the hopes of reaching the next level or even the top. ...read more.