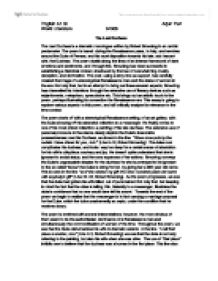 My Last Duchess. The Last Duchess is a dramatic monologue written by Robert Browning in an Iambic pentameter.

The Last Duchess The Last Duchess is a dramatic monologue written by Robert Browning in an Iambic pentameter. The poem is based during the Renaissance years, in Italy, and revolves around the Duke of Ferrara, and his cruel disposition towards his late, adolescent wife, the Duchess. The poem dwells along the lines of an intense framework of dark emotions and sentiments, and through this, Browning has been successful in establishing a historical context, shadowed by themes of overwhelming cruelty, deception, and domination. The poet, using a story line as support, has carefully created the image of a stereotypical Renaissance man and the status of women in the era. Not only that, but in an attempt to bring out these several aspects, Browning has channelled his intentions through the extensive use of literary devices such as enjambments, metaphors, synecdoche etc. This brings out an artistic touch to the poem, perhaps illustrating its connection the Renaissance era. This essay is going to explore various aspects to this poem, and will critically analyze its relevance to the time context. The poem starts off with a stereotypical Renaissance setting, of an art gallery, with the Duke showing off his extensive collection to a messenger. He finally comes to one of his most prized collection: a painting of his late duchess. ...read more.

Carrying on from the themes, we begin to see that Browning has also paid extreme attention to the structural component of the poem. He has written the poem in an Iambic Pentameter, indicating that there are exactly ten syllables on each line. This definitive nature, in a way gives the poem a sort of rhythm and tempo. It keeps the reader gripped. Browning follows this up with the use the rhyme scheme AA, BB, CC... The poem is structured in three different time contexts: the present, the past, and the future, which gives the poem a sense of purpose: it helps depict the Duke's character in closer detail, for it communicates what the Duke feels during each period. The structure of the poem also helps establish the time context. For example, the setting of the poem is in an art gallery, and through this we are able to see that the poem was set during the renaissance era, where art was appreciated immensely. The tone and mood of the poem is, in a way, ominous, and dark. The poet successfully establishes a sense of cruelty, through lines like "I gave commands, and all smiles stopped". This line brings out the inevitability, and the menacingly cold nature of the Duke's character. ...read more.

This creates a sense of eeriness and at the same time establishes the Duke's bloated aristocracy. Another essential device used by browning is enjambments- they add a bit of suspense to the poem and ensure that the reader is captivated by the poem. This can be seen in the line "Fr Pandolf's hands worked busily a day" (Line 3-4, Robert Browning). The enjambment in this line helps add to the tone and mood of the poem by fabricating a sense of graveness, and darkness. On the whole the poem, to me, seems to be a manifestation of several different aspects of history, ranging from the role of men in the renaissance era, and the oppression women went through during the time. Not only that, but Browning incorporates several other aspects as well, such as Renaissance art and beauty. The poem is enriched in literary devices and techniques which enhance the poem's effect as a dramatic monologue. Browning has dug deep into the psyche of one particular man, and through the Duke's own words Browning has been able to provide a critical analysis of his character. This is absolutely magnificent, for he has been able to capture the exact tone and mood required, using the exact diction to portray his stand of the era. 2149 words ?? ?? ?? ?? English A1 Sl Arjun Puri World Literature 04305 ...read more.