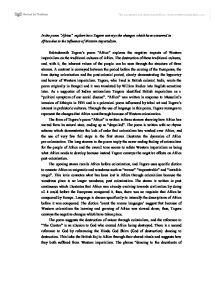 n the poem Africa explore how Tagore conveys the changes which have occurred in Africa due to the influence of Western imperialism.

In the poem "Africa" explore how Tagore conveys the changes which have occurred in Africa due to the influence of Western imperialism. Rabindranath Tagore's poem "Africa" explores the negative impacts of Western imperialism on the traditional cultures of Africa. The destruction of these traditional cultures, and. with it, the inherent values of the people can be seen through the structure of three stanzas. A contrast is conveyed between the period before the coming of the Europeans, the time during colonization and the post-colonial period, clearly demonstrating the hypocrisy and horror of Western imperialism. Tagore, who lived in British colonial India, wrote the poem originally in Bengali and it was translated by William Radice into English sometime later. As a supporter of Indian nationalism Targore identified British imperialism as a "political symptom of our social disease". "Africa" was written in response to Mussolini's invasion of Ethiopia in 1935 and is a polemical poem influenced by tribal art and Tagore's interest in prehistoric cultures. Through the use of language in this poem, Tagore manages to represent the changes that Africa went through because of Western colonization. ...read more.

The negative lexis "snatched" suggests Africa being separated from Asia. The parallel structure in 'you ridiculed horror ... you cowed fear' emphasizes Africa's triumph over these traditional enemies of humanity which highlights Africa in a positive light. This increases the sense of sorrow at the continent succumbing to European 'contempt'. From Tagore's description of pre colonial Africa it is evident that he condemns the conquest by Europe, as the natural ability of Africa to develop and mature was "snatched away" to be controlled by Westerners, resulting in ignorance and slow growth. The conquest of Africa and the changes that it went through can be seen more clearly in stanza two where the lexis connotes Africa as a dark and mysterious place. The diction "shadowy" sets the tone as mystifying and places the image of Africa as sinister. Tagore uses anthropomorphism to describe the conquest by Europe: 'under your black veil...Your human aspect remained unknown' and this connotes how Africa's very 'otherness' was misunderstood by the invaders who failed to realise the potential of Africa's human resources. The lexis 'iron manacles' emphasizes the oppression of Western civilization and contrasts to the nature described in stanza one. ...read more.

The onomatopoeia 'howls' is sinister in tone, and the heavy vowels suggest hunger in Africa. Tagore is prophetic about the hostile future of civilization and his hope is that the last words 'midst of murderous insanity' are for forgiveness, that the hypocrisy of the West will cease to exist. The lexis choice of the soft plosives midst and murderous leave the reader with a mystifying feeling to the effects of post-colonization. Tagore uses the 3 stanza structure to connote the changes that Africa went through pre and post colonization and it is clear to the reader that Tagore feels that the imposition of Western civilization placed upon Africa was murderous and against the natural order. Tagore condemns the West in his final stanza with the symbol of a 'dying light' showing that Western colonialism receives no support from him. This is clear in his use of the phrase "despoiled Africa" which shows how little has been left for the traditional inhabitants. In a powerful suggestion to the transgressors, Tagore wants to seek acknowledgement of their actions as they plead for forgiveness. Tagore demonstrates that the conquest by Europe is barbaric because it changes and destroys the potential for African cultures to develop in their own time. ...read more.