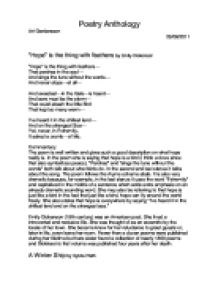 Poetry Anthology Ari Gardarsson 26/09/2011 "Hope" is the thing with feathers by Emily Dickenson "Hope" is the thing with feathers- That perches in the soul- And sings the tune without the words- And never stops-at all- And sweetest-in the Gale-is heard- And sore must be the storm- That could abash the little Bird That kept so many warm- I've heard it in the chillest land- And on the strangest Sea- Yet, never, in Extremity, It asked a crumb-of Me. Commentary: The poem is well written and gives such a good description on what hope really is. In the poem she is saying that hope is a bird (i think a dove since that also symbolizes peace). "Perches" and "sings the tune without the words" both talk about what birds do. In the second and last stanza it talks about the song. The poem follows the rhyme scheme abab. It is also very dramatic because, for example, in the last stanza it uses the word "Extremity" and capitalized in the middle of a sentence which adds extra emphasis on an already dramatic sounding word. She may also be referring to that hope is just like a bird in the fact that just like a bird, hope can fly around the world freely. She also states that hope is everywhere by saying "I've heard it in the chillest land and on the strangest sea." Emily Dickenson (19th century) was an American poet. She lived a introverted and reclusive life. She was thought of as an eccentric by the locals of her town. She became know for her reluctance to greet guests or, later in life, even leave her room. Fewer than a dozen poems were published during her lifetime but here sister found a collection of nearly 1800 poems and Dickinson's first volume was published four years after her death. A Winter Ship by Sylvia Plath At this wharf there are no grand landings to speak of. ...read more.

It reminds me slightly of The Cat in the Hat poem, "Green Eggs and Ham." It is also a funny and original touch to include at the end that it took 14 years to write because he is only one inch tall Shel Silverstein (20th century) was a poet and author of children's books and much, much more. His biggest selling children's book was the Giving tree and is considered one of the most successful children's book in years. Another well know book of his is Where the Sidewalk Ends. He died of a heart attack in 1999. Ghost House by Robert Frost I dwell in a lonely house I know That vanished many a summer ago, And left no trace but the cellar walls, And a cellar in which the daylight falls, And the purple-stemmed wild raspberries grow. O'er ruined fences the grape-vines shield The woods come back to the mowing field; The orchard tree has grown one copse Of new wood and old where the woodpecker chops; The footpath down to the well is healed. I dwell with a strangely aching heart In that vanished abode there far apart On that disused and forgotten road That has no dust-bath now for the toad. Night comes; the black bats tumble and dart; The whippoorwill is coming to shout And hush and cluck and flutter about: I hear him begin far enough away Full many a time to say his say Before he arrives to say it out. It is under the small, dim, summer star. I know not who these mute folk are Who share the unlit place with me-- Those stones out under the low-limbed tree Doubtless bear names that the mosses mar. They are tireless folk, but slow and sad, Though two, close-keeping, are lass and lad,-- With none among them that ever sings, And yet, in view of how many things, As sweet companions as might be had. ...read more.

When something as complex as a butterfly is mixed up with something as simple as a fallen blossom it show that seeing can be deceiving. And is shows that something so extremely delicate and fragile can be a living organism. Arakida Moritake was a japanese poet in the 16th century. He excelled in the fields of waka, renga andin particular haikai. His parents were Negi Morihide and a Shintoist. Later, at the age of 69, he became head priest of the Inner Ise Shrine. The above poem is his most famous work. Little Life by Ari Gardarsson Little lazy larva lying luxuriously, labefactation. Commentary: I chose to write a haiku because in short, they are my favorite type of poem. I then decided to alliterate the whole poem just to make it more challenging after getting the idea from Caelin and his alliterative haikus. I'm not quite sure why I chose larva as the subject of my haiku but it was the first thing that popped to mind. I also decided to create a world of luxury around them which contradicts what they're normal living habits which is filled with mud. I chose the last word labefactation because it means the process of coming apart or decaying and I thought this would be an appropriate end to a short and lazy life of a larva. I also wanted to have a single word for my last line. Transformation by Ari Gardarsson Caterpillars camp claudent, cramped, confined, Butterfly berceuse. Commentary: For this haiku I didn't have any inspiration, it just came to me. I knew that I wanted to have it be alliterative just like the one before so I started out with caterpillars. After that I wanted to create the effect of them changing into a butterfly. For the last line I couldn't keep going with the alliteration so i decided to switch letters and alliterate with b. I also chose the word berceuse, meaning lullaby, because it fit so well with butterflies being snuggled up in their cuccoons. This is my favorite of the two haikus. ...read more.