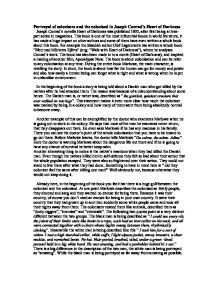 Portrayal of colonisers and the colonised in Joseph Conrad's Heart of Darkness Joseph Conrad's novella Heart of Darkness was published 1902, after first being a three-part series in magazines. This book is one of the most influential books in world literature, it has made a huge impact on other authors and some of them have even written a whole book about this book. For example the Swedish author Olof Lagercrantz has written a whole book "F�rd med M�rkrets Hj�rta" (eng: "Walk with Heart of Darkness"), where he analyses Conrad's work. The book has also been made in to a movie (Heart of Darkness), and inspired a making of another film, Apocalypse Now. The book is about colonisation and can be refer to any colonisation at any time. During the entire book Marlowe, the main character, is retelling the story. In short, the book is about how far the human can go for money and power and also how easily a human being can forget what is right and what is wrong when he is put in unfamiliar environment. In the beginning of the book a story is being told about a Danish man who got killed by the natives after he had attacked them. ...read more.

While the black man is being portrayed as far away from amazing as possible. He his being described as if he has done something terrible and that he is pretty much worthless. Marlowe also describes the colonised man as if he could see every rib in his body, compared to the white man as which he describes as having a big white hand. My point is that Marlowe didn't have to mention that his hand was big, he could have said "...parasol held in a white hand". But I think "big" has a purpose in this context, that he really wants to mark the big difference between the colonised and the coloniser. Not just that the white people had more power, but also that they look so different and that they lived a wealthy life in the colony with good food and drinks. Meanwhile the colonised, whose ribs you could even see, almost were starving to death. One strong scene in the book is when the coloniser blamed a black man for starting a fire, as punishment they beat him so hard that he almost died and then they left him alone in a corner. Later the white man discussed the incident with Marlowe and the white man says "Serve him right...That's the only way. ...read more.

But we do know that the story Marlow is telling is about an unnamed European colony in Africa. Marlowe describes the Thames as is has been one of the darkest places on the earth. In the book we also being located somewhere that really sounds as the Congo River in Africa. Then we can relate Thames as the Congo River, but we can also make parallels between London and Congo. The point is that the white people treat the black people just as bad as the Romans treated them. Which is a bit of a paradox. So what is Conrad trying to say about the title "Heart of Darkness"? Is he trying to make a point how horrible the colonisation really where for everyone, not just the natives. Or is he trying to show how the dark people literally were pushed down by the white people, wanting to make it even clearer that they hadn't done anything wrong and showing how helpless they were? Maybe his point is to show us the darkness in the white peoples heart? Conrad is perhaps talking about the geographical darkness? That the jungle is one of the darkest place, for instance that the river is one of the darkest places in the book. Because the river is the reason why the black people are there, without the river they wouldn't have anything to do- no river-no trading. ...read more.

Overall the student has grasped the question to an intermediate level, and sets about making some discerning points on the literary and descriptive techniques that differentiate the coloniser and the colonised in Heart of Darkness. When we reach the paragraphs ...

Overall the student has grasped the question to an intermediate level, and sets about making some discerning points on the literary and descriptive techniques that differentiate the coloniser and the colonised in Heart of Darkness. When we reach the paragraphs where the larger-than-life appearance and corporeal power of the white man is commented upon, there seems a particularly apt moment to carry this disparity Conrad chooses to construct into a deeper level of analysis. For instance, what does emphasising these physical differences function towards on a larger scale? There is further context that can be brought in here with regards to the underlying racial anxieties, such as Western stereotypes of the "hot-blooded" or "hyper-masculine/quasi-bestial" black man, which renders their malnourishment at the hands of the coloniser as a form of corporeal and psychological control. The essay then goes on to focus mostly on the moral ambiguities of colonisation which Conrad constructs largely through the character of Kurtz. The student identifies and comments upon Kurtz's cold pragmatism and disillusionment, but if this observation had been better linked to the interesting parallels later drawn between the home nation and the colony (the Thames & the Congo River), this would have demonstrated sensitivity to the other facet of this question: how is their portrayal similar too? How does this alter or problematise the colonised-coloniser relationship when the enterprise of colonisation tangles the two in ways the white man would rather keep distinct and seperate?

There is a decent set-up here, in terms of the points the student chooses to discuss, for a firm level of analysis to then follow. However, this doesn't quite come about due to the numerous times the student chooses to tie their points to a rudimentary level of explanation, leaving many things unsaid except inasmuch to acknowledge them as "a given". Sentences such as these should in general be avoided: "this scene says pretty much everything...", "this is a bit of a paradox" or "this statement makes it clear". They aren't analyses in themselves. I am not saying state the obvious constantly, but if they are to form the basis of deeper analysis they need to be fully articulated then built upon - not considered ends in themselves and abandoned. The student makes a point successfully, provides sound proof, then considers these sufficient in themselves when in fact there is a third stage to work through: explain. Point, proof, explain. The conclusion makes some good points but needs to make them more assertively. They are posed as tentative rhetorical questions instead, which undermine the argument when it should be most clear and forceful. Also, except at undergraduate level and beyond, it is usually not advisable to bring up new points of argument or new examples in the conclusion. The final sentence opens up a whole new vista in terms of geographical spaces of darkness, climate and its psychological and economic effects. As the student's area of analysis throughout the essay focuses more on physical and moral facets of the colonised/coloniser relationship, it is better for their argument's sake not to digress in the very last moment.

At no point does the quality of the writing hinder the reader's understanding, but it is largely stylistic and formal awkwardness that undermines this piece all throughout. There are careless mistakes with tenses, such as "they didn't even considered..." which can easily be caught with another round of proofreading on the student's part before submission. Due to the rather conversational instead of academic tone with which this has been written, there are a serious amount of incomplete, badly formed sentences which can either be connected to the previous or following sentence with the appropriate punctuation, or seperated altogether in order to make grammatical sense. For instance, it is really difficult to read something like this: "That the jungle is one of the darkest place, for instance that the river is one of the darkest places in the book." These run-on observations prevent the flow of the argument and a coherent style from being sustained. It makes a huge contribution to an essay to get this right; for instance, simply restructuring that sentence to say "Conrad may also be talking about geographical darkness here, for he emphasises the physical darkness of both river and jungle repeatedly throughout the book", would explain the student's point not only more clearly but more succinctly too. Overall, good close reading and observations, but they need to be a) analysed more thoroughly and b) expressed accurately, both in syntax and style.