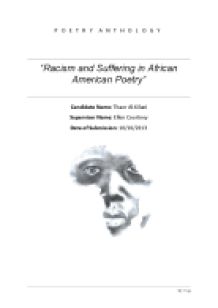 This poem is centered around a prominent and disturbing racial injustice in modern history, which is lynching. "Song for a Dark Girl" is blatantly clear about something: in the context of this poem, the African American people are suffering, and Jesus is not doing anything about it . ?On Being Brought from Africa to America? by Phillis Wheatley ________________ 'Twas mercy brought me from my Pagan land, Taught my benighted soul to understand That there's a God, that there's a Saviour too: Once I redemption neither sought nor knew. Some view our sable race with scornful eye, "Their colour is a diabolic die." Remember, Christians, Negros, black as Cain, May be refin'd, and join th' angelic train. Commentary ________________ The ?On Being Brought from Africa to America? by Phillis Wheatley reveals the story of the poet who is a slave that was brought from Africa to America by what she describes as "mercy." And it's mercy that converts the speaker to Christianity, which she knew nothing about in Africa. The expressing of appreciation for her enslavement may be unanticipated by most readers. It can be said that the poem is quite religious in nature. The poem begins by the poet acclaiming that her slavery as valuable, since it has brought her to Christianity. Although people view the black race negatively, the poem reflects Wheatley?s belief that anyone, even "n*****s," can be rescued by joining Christianity. The poem is written in Iambic pentameter, and the vernacular can be explained due to the fact that the poem is written in the 1700s. The poet makes use of personification in her poem, ?mercy? ?Twas mercy brought me from my Pagan land?. This can be considered as an allusion to God?s merciful nature. In this poem, Wheatley shares in this poem the positive side of her experiences as a slave, by abandoning her Godless ways, and her condemnation of the people who deny religious equality to black people and see their nature as a curse by God. ...read more.

Guess who's giving birth to a baby I don't trip or let it fade me From out of the fryin pan We jump into another form of slavery Even now I get discouraged Wonder if they take it all back Will I still keep the courage I refuse to be a role model I set goals, take control, drink out my own bottles I make mistakes but learn from every one And when it's said and done I bet this brother be a better one If I upset you don't stress never forget That God isn't finished with me yet I feel his hand on my brain When I write rhymes I go blind and let the Lord do his thing But am I less holy Cause I chose to puff a blunt and drink a beer with my homies Before we find world peace We gotta find peace and end the war in the streets My ghetto gospel [Hook] [Outro] Lord can you hear me speak To pay the price of being hellbound Comment: Tupac was an influential artist of his time, and in Ghetto Gospel, he manages to address poverty and racial discrimination on the streets in the lyrics of this song. E P I L O G U E After engaging in the Poetry anthology project, I had the opportunity to broaden my scope on African-American poetry. Through analyzing the poems, I gained more insight into the difficulties which Africans and African Americans had to face throughout their history. The poets have chosen poetry as an approach to these difficulties, and each has expressed their attitude and emotions towards such matter in a different way. B I B L I O G R A P H Y * Nichols, Grace. "FROM I Is a Long-Memoried Woman (1983) - Taint." I Have Crossed an Ocean: Selected Poems. Tarset: Bloodaxe, 2010. N. pag. Print. * http://rapgenius.com/2pac-ghetto-gospel-lyrics * http://www.ohioswallow.com/extras/0821415166_intro.pdf * http://www.english.illinois.edu/maps/poets/a_f/bontemps/additionalpoems.htm * http://www.poetryfoundation.org/poem/185777#poem * http://www.afropoets.net/mayaangelou21.html * http://www.mesacc.edu/~barmd97231/SongforaDarkGirl.html * http://www.poetryfoundation.org/poem/171320 * http://www.vcu.edu/engweb/webtexts/Wheatley/brought.html ________________ | Page ...read more.