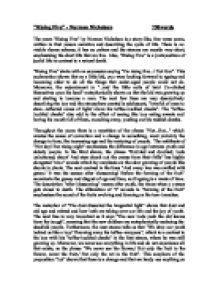 "Rising Five" - Norman Nicholson 750words The poem "Rising Five" by Norman Nicholson is a story-like, free verse poem, written in first person narrative and describing the cycle of life. There is no visible rhyme scheme, it has no pattern and the stanzas are mostly very short, emphasising the short life that we live. Also, "Rising Five" is a juxtaposition of joyful life in contrast to a natural death. "Rising Five" starts with an expression saying "I'm rising five.../ Not four". This exclamation shows that as a little kid, you were looking forward to ageing and becoming older to do all the things that under-aged people could not do. Moreover, the enjambment in "...and the little coils of hair/ Un-clicked themselves upon his head" metaphorically shows us that the kid was growing up and starting to become a man. ...read more.

The next contrast in the lines "And every tree was swilled with green./ It was the season after blossoming/ Before the forming of the fruit" accentuate the greasy and disgust of age and time, as if ageing is a waste of time. The description "after blossoming" means after youth, the times when a person gets closer to death. The alliteration of "f" sounds in "forming of the fruit" emphasises the sound of the fruits evolving and forming on the tree-branches. The metaphor of "The dust dissected the tangential light" shows that dust and old age and related and how both are taking over our life and the joy of youth. The next line is very important as it says "The new buds push the old leaves from the bough", meaning that the new children are metaphorically replacing the dead/old people. ...read more.

This is also emphasised with the contrast of "baby's cradle" and "grave" which are both objects where a person lies in during his 'life-time'/'death-time". The last two lines, "Not living/ But rising dead" sum up the whole poem by saying that life is not completely used and not lived as it should be. Life is too short and that we are only living to die, which is a very depressing thought. The poem is written very freely and open to give emphasis on out lives, which are mostly open and widely changeable. Nicholson cleverly changed the poem using the theme of time, showing a lifeline which starts off by wanting to become older and then wishing to be young again when death approaches. The poem was different to others as it told us about all different stages in life and used different methods of describing things very metaphorical and with a lot of anaphora to give a more descriptive scene. ...read more.