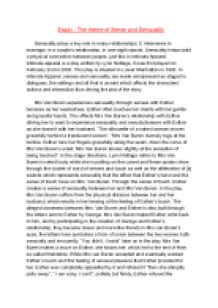 Ã¯Â»Â¿Essay : The theme of Sense and Sensuality Sensuality plays a key role in many relationships; it intervenes in marriage, in a coupleâ€™s relationship, in one-night stands. Sensuality helps build a physical connection between people, just like in Intimate Apparel. Intimate apparel is a play written by Lynn Nottage, it was first played on February 2nd in 2003. This play is situated in Lower Manhattan in 1905. In Intimate Apparel, senses and sensuality are made omnipresent as staged in dialogues, the settings and all that is unsaid which affects the charactersâ€™ actions and interaction thus driving the plot of the story. Mrs Van Buren experiences sensuality through senses with Esther because as her seamstress, Esther often touches her clients with her gentle and graceful hands. This affects Mrs Van Burenâ€™s relationship with Esther driving her to want to experience sensuality and s****l pleasure with Esther as she doesnâ€™t with her husband. â€œThe silhouette of a naked woman moves gracefully behind a translucent screenâ€. â€œMrs Van Buren clumsily tugs at the bodice. Esther runs her fingers gracefully along the seam, down the curve of Mrs Van Burenâ€™s waist. Mrs Van Buren tenses slightly at the sensation of being touchedâ€, in the stage directions, Lynn Nottage refers to Mrs Van Burenâ€™s naked body while she is putting on the corset and these quotes show ...read more.

Georgeâ€™s letters are centered around the beautiful words, the s****l references and appeals to marry him. Their first contact and form of communication was through the letters. Although, the reader has access to Georgeâ€™s letters; he doesnâ€™t have the same luxury of reading Estherâ€™s. In Georgeâ€™s letters, the sweet and pleasureful words were a common theme, â€œIt isnâ€™t appropriate, but I will say it, I crave a gentlewoman's touch, even if it only be to turn down my collar or brush away the dirt in the evenings.â€ The pressure that Esther felt by the society into getting married and Georgeâ€™s letters made her lose her sensibility. She didnâ€™t listen to her gut feeling or to Mrs. Dicksonâ€™s words warning her about a potentially miserable life, â€œ I donâ€™t trust him, one bitâ€. Esther lost her senses by giving into this pressure, she only thought about getting married, not about her life with someone that she doesnâ€™t really love. When asked about the reason for marrying George, Esther answered â€œ... Loveâ€ with a clear hesitation. Unlike with the other characters, Esther betrayed her own sensibility and was out of her senses by marrying George; her sensibility didnâ€™t allow her to love Mrs. Van Buren, it didnâ€™t allow her to disrespect Mr. ...read more.

â€œEventually he stops. Silence. Mayme sits on her bed. Then Esther exits with the smoking jacket.â€ This scene could mean the impossibility of any sensuality in Maymeâ€™s life as her bed is what holds her when she falls down from despair, as with George she feels a genuine love and sensuality. To conclude, in Intimate Apparel, senses and sensuality are made omnipresent as staged in dialogues, the settings and all that is unsaid which affects the charactersâ€™ actions and interactions, thus driving the plot of the story. This thesis statement was proven in this essay through the analysis of Estherâ€™s relationships with different characters; in her marriage with George which was revealed to the reader by Georgeâ€™s dislike for fabric and his betrayal of Esther. The smoking jacket which stands as a very important symbol represents Esther and Georgeâ€™s incompatibility as a married couple as the jacket and fabric hold very sensual meanings, the senses played an important role in their marriage as Esther lost her senses in her marriage with George. However, with the other characters, Esther acts as a very sensible person as she refuses the sensuality provided to her by Ms Van Buren, respects Mr Marksâ€™s religion and despite her sensual attraction towards him, she keeps her distance with him. In the background, the bed acts as a sensuality detector, because with the absence of its use in the scenes, it represents the impossibility of sensuality. ...read more.