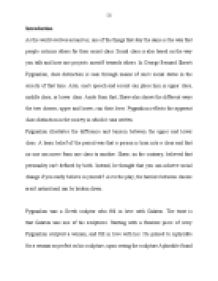 Social Distinction in the novel Pygmalion

﻿[] Introduction As the world evolves around us; one of the things that stay the same is the way that people criticize others for their social class. Social class is also based on the way you talk and how one projects oneself towards others. In George Bernard Shaw's Pygmalion, class distinction is seen through means of one's social status in the society of that time. Also, one's speech and accent can place him in upper class, middle class, or lower class. Aside from that, Shaw also shows the different ways the two classes, upper and lower, run their lives. Pygmalion reflects the apparent class distinction in the society in which it was written. Pygmalion illustrates the difference and tension between the upper and lower class. A basic belief of the period was that a person is born into a class and that no one can move from one class to another. Shaw, on the contrary, believed that personality isn't defined by birth. Instead, he thought that you can achieve social change if you really believe in yourself. As to the play, the barriers between classes aren't natural and can be broken down. Pygmalion was a Greek sculptor who fell in love with Galatea. The twist is that Galatea was one of his sculptures. Starting with a flawless piece of ivory Pygmalion sculpted a woman, and fell in love with her. He prayed to Aphrodite for a woman as perfect as his sculpture; upon seeing the sculpture Aphrodite found that it was in her image, and so brought Galatea to life. George Bernard Shaw's version of the tale, told in the play Pygmalion, doesn't start with a piece of marble. Rather it starts with a woman and, while she is bathed and provided with new clothing, this isn't a story about sculpting her body; rather this is a play about sculpting the human presence. ...read more.

We can also see it as an interesting example of “how English works”. Registers represents varieties of language, defined by use. So, cockney speaking Londoners, living in a small geographic area and maintaining a closed system of types of sounds, phrases and noises, might be grouped and called a register. This Cockney registers also holds the key to elements of the class structure. A certain voluble cheerfulness or sentimental rhetoric, as displayed by Mr. Doolittle, and the stoutness of spirit which leads Eliza to seek self improvement lessons from Henry are also an important part of the Cockney register. When Henry first meets Eliza, he contends that he can pass her off as the Queen of Sheba. Not only must he transform her accent, he must introduce a different vernacular which would help Eliza to identify with the upper class. Shaw addresses the issue of snobbery when he talks to Eliza about “cutting off her old friends now she has risen in the world – that’s what we call snobbery” Eliza confirms everyone understands the lessons of linguistic class. Shaw makes wonderful use of example, in which he demonstrates the sounds of lower and upper class. Upper class is Freddy’s way of saying, How Do You Do, as Ähdedo. Here is the lower class, as expressed by Eliza, “Garn”. Eliza uses this word to mean “Go On” as a way of saying Do Not Tease Me. Another assertion related to the class distinction is the sense of a wider vocabulary and a broader way of encountering the world through language and self expression. This play appears to maintain a balance. Arthur Doolittle is wonderfully express and Henry impresses with his easy intelligence. A common truth is that you can’t make a silk purse out of a sow’s ear. No more than a duchess out of a flower girl or flesh and blood out of marble. ...read more.

A very remarkable aspect in the plot is that the main thing that Eliza has to change is her accent vocabulary and tone of voice, actually it´s interesting how the author tries to capture the essence of Eliza’s accent not just by registering a possible transcription to her pronunciation but by including a transcription of the way Eliza shouted which is something I just was not able to reproduce in my mind. It´s also very funny how the “fairy godmother” is transmigrated into a pair of linguistic investigators and the way the personality of those characters is so different that seems to be the opposite but at the same time makes them a very interesting and witty duo. The environment and essence of the classes is interestingly reflected in the descriptions of the room´s furniture and clothes, we can also observe the early use of technology in linguistic investigations by Pickering and Higgins. I felt that the story could have been longer but it would have been a problem because it is a play, there were situations that would have been interesting to observe in a more detailed way, such as the improvement of Eliza’s speech, because it was just so sudden. There were also some other characters that I would have liked to be more developed within the plot, for example Freddy and his family which were a hilarious representation of mid class aspirants. It is commendable to see the way it reflects English society in these years and the importance they gave and still give to the accent in order to determine a social status. However, there is an aspect that I just can´t conceive, which is Eliza´s evolution, how she changes is really difficult to believe and I actually think that nobody is able to change in such a short period of time even if that person has the best teachers. ...read more.