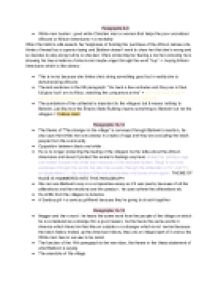 Stranger in the Village Analysis Notes

Ã¯Â»Â¿Paragraphs 6-9 * White man burden : good white Christian man or woman that helps the poor uncivilized Africans or African Americans = a mentality When the bistroâ€™s wife asserts her happiness of funding the purchase of the African natives she thinks of herself as a superior being and Baldwin doesnâ€™t want to show her that sheâ€™s wrong and so decides to play along but he is shocked. Sheâ€™s protecting her feeling a but heâ€™s showing he is showing his true emotions of shock and maybe anger through the word â€œbuyâ€ -> buying African Americans which is like slavery * This is ironic because she thinks sheâ€™s doing something good but in reality she is dehumanizing Africans * The last sentence in the 9th paragraph: â€œGo back a few centuries and they are in their full glory but-I am in Africa, watching the conquerors arriveâ€ = refer precisely to each word and each punctuation mark because everything has a meaning * The symbolism of the cathedral is important to the villagers but it means nothing to Baldwin, just ...read more.

* The function of the 14th paragraph is the man idea, the theme or the thesis statement of what Baldwin is saying * The anecdote of the village * When the white man arrived to America they thought of and treated the Native Americans like cattle = intense dehumanization Pathos = Ã©motions Logos = logique Ethos = credibility Paragraphs 15-17 * The other slaves : Haitians * The American slave and the Haitian slave : the American slaves canâ€™t trace their history before their ancestor was stood to an American slave owner while Haitians can and they can trace it back to royalty IMPORTANT because this is the history of America * The rtjoriacl appeal is logos when he talks about the history of the Americans and ethos because he is a black man himself and this gives him credibility. Paragraph 18 * Compare American n***o to European black begin : white people in America are directly confronted to Shari g in space with black men so they have to live with them while the European black men are just removed from the geography. ...read more.

men can ever recover the concept of living in a world with no black men and that they have to accept their presence * The rhetorical appeal is logos = because he is stating facts * The paradox of the existence of the black men in America = the issue of the black men in America is somewhat of an achievement, because they have always faced the issues, they reacted to the issues that allowed progress. * Plea = expose arguments to defend yourself to gain justice because explains many argument that are based on logos * Form that makes you think of a plea = â€œthe time has come..â€ â€”> through tone that is attention capturing â€”> almost becomes a speech Conclusion Positive and negative = because he is giving us the key elements to evolve and the last sentence is addressed to white peoples to tell them that they exist. He starts telling us about the village but then he starts talking about America and the Americans and we forget about the village until the last paragraph. ...read more.