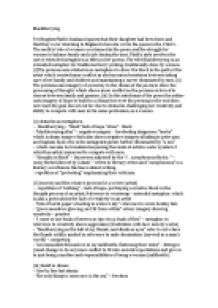 Sylvia Plath's &quot;Blackberrying&quot;. The poem is significant as it underlines the struggle of women in a male dominated world

﻿BlackBerrying Ted Hughes Plath?s husband quotes that their daughter had been born and that they were returning to England when she wrote the poem in the 1960?s. The motif of role of women is exclaimed in the poem and the struggle for women to balance family and a job during the time. Plath?s style involves the use of extended metaphors as titles in her poems. The title BlackBerrying is an extended metaphor for traditional berry picking, traditionally done by women. (i)The persona uses obstacles as metaphors to show the block in the path of the artist which created inner conflict as she has mixed emotions between taking care of her family and children and maintaining a career dominated by men. (ii) The persona uses imagery of a journey to the climax of the poem to show the processing of thought, which shows inner conflict as the persona is forced to choose between family and passion. ...read more.

- repetition of ?protesting? emphasizing their criticism. (ii) Journey and the creative process for a writer (artist) - - repetition of ?nothing? ? lack of hope, portraying a creative block in the thought process of an artist. Reference to wintering ? extended metaphor, which is also a poem about the lack of creativity in an artist - ?bits of burnt paper wheeling in a blown sky? reference to wind, destiny fate - ?green meadows glowing, as if lit from within? colour imagery showing creativity ? positive - ?I come to one bush of berries so ripe it is a bush of flies? ? metaphor in reference to creativity shows aggression (frustration with how society works) ? ?blackberrying as the ball of my thumb, and dumb as eyes? refer to cut where the thumb is fallic symbol in reference to male domination (survival in a man?s world) ...read more.

societies rules and (2) male domination (iv) journey of the artist explained through structure of poem.. firstly it begins with an artist block (2) frustration (3) criticism (4) inflow of ideas (creation) (5) anticlimax where creation is overlooked because you are a woman in society as apposed to man.. In conclusion.. The poem is significant as it underlines the struggle of women in a male dominated world, which creates external conflict with society and internal conflict as we are put in a position to decide between family life or career. The poem identifies a significant time in her life as she had just given birth to her daughter still with her husband returning to England and the changes in setting must have caused the mixed emotions to flow through as the sudden realization of the responsibility of baby and the well being may hinder her own development in her career but also the drawbacks with her husband and his affairs causes mixed emotions to flow through in this poem also showing her frustration towards men. ...read more.