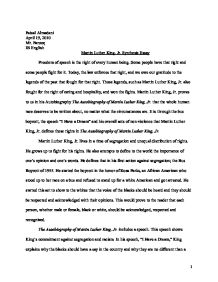 This would prove to the reader that each person, whether male or female, black or white, should be acknowledged, respected and recognized. The Autobiography of Martin Luther King, Jr. includes a speech. This speech shows King's commitment against segregation and r****m. In his speech, "I Have a Dream," King explains why the blacks should have a say in the country and why they are no different than a white person when it comes to skin tone. He states "I have a dream that my four little children will one day live in a nation where they will not be judged by the color of their skin but by the content of their character." (The Autobiography of Martin Luther King, Jr. ...read more.

That identifies that the goal of a lot of literature, including The Autobiography of Martin Luther King, Jr., is to persuade the public of the justice that is needed, and that all voices should be heard Our job is to live in life and survive, and to survive we need to have a voice as well as recognition of opinion. What better way to do that than write your opinion and publish it! Martin Luther King, Jr. conveys such rights by speaking about other people such as Rosa Parks and many others like her. He also mentions Coretta in the autobiography to show her importance. Even when in the weakest positions of near death, Clayborne Carson mentions every detailed aspects of King's life and uses it while editing the Autobiography. That is all evidence that human beings are worth caring for and writing about under any circumstances. ...read more.