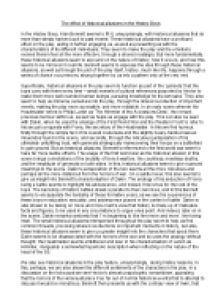 The effect of historical allusions in the History Boys

﻿The effect of historical allusions in the History Boys In the History Boys, Alan Bennett seems to fill it, unsurprisingly, with historical allusions that do more than simply harken back to past events. These historical allusions have a profound effect on the play, aiding in further engaging us, as well as presenting us with the characteristics of its different individuals. They seem to make the play and the emotions evoked therein feel all the more effective, through a shared nostalgia. But more fundamentally, these historical allusions seem to expound on the nature of history, how it occurs, and how this seems to be mirrored in real life. Bennett seems to espouse the idea through these historical allusions, as well as through the plot of the play itself, history, much like life, happens through a series of chance occurrences, strung together by us into a pattern only at the very end. Superficially, historical allusions in the play seem to function as part of the ?gobbets? that the boys carry with them every time ? small morsels of cultural references purported by Hector to make them more well-rounded human beings, pursuing knowledge for its own sake. They also seem to help us immerse ourselves into the play, through the shared recollection of important events, making the play more accessible, and more relatable. ...read more.

The mention and discussion of the holocaust during Irwin and Hector?s shared lesson seems to force them to lay their allegiance for either of the teachers, and indeed, we can see its polarising effects, splitting them in debate. Historical allusions in the scene, as previously mentioned, help with presenting to us the different characterisation of each of the so-called ?History Boys.? But these historical allusions do more than this. Bennett seems to use these historical allusions in each scene, sensitive to their different connotations. In their discussion of the holocaust, we are left in a state of discomfort, as Bennett seems to almost force us, along with the rest of the characters, to choose our allegiances, all the while reminding us of the underpinnings of suffering and shared grief that comes with a genocide on as massive a level as the Holocaust. And in this, historical allusions again help us further engage with the play. Bennett provokes in us an emotional response not just to the pain of Hector losing his students after years of ?literary padding?, but also through the unprecedented loss of human life that we see in the holocaust. We can also see this to a lesser extent in Irwin?s previous discussion with the rest of the class of the first world war ? a discussion that perhaps may not have an emotional impact equal to that of the discussion on the Holocaust, but relevant nonetheless in its usage of historical allusions. ...read more.

They pivot on the sheer randomness of things, the behest of a universe with neither intention nor plan. To look at the plot of the History Boys is to see these historical allusions, placed in real life. Had Hector not died, perhaps more of the boys would have taken to heart all he taught; had Irwin not gone on with Hector on his bike, perhaps Hector never would have died; had Irwin not become disabled, perhaps he and Dakin would have fulfilled what they talked about. It is one instance after another of uncontrollable circumstances, shaping the occurrences in life, and in history, an idea made plain by the ubiquity of these historical allusions. Indeed, Mrs. Lintot herself, an individual acting almost as an observing outsider reflects on Hector?s initial dismissal that a lesson on it ?would teach the boys more about history and the utter randomness of things than..., well, than I?ve ever managed to do so far.? Historical allusions, more than anything though, form an integral part of all the characters in the play. They seem to move towards their futures, bringing all the small things learned from school in some way or another, but all the while having history as a foundational and integral part of their personalities, and indeed, their lives. Perhaps it is Rudge, ultimately the most honest and the most practical of all the characters in the play, who said it best: ?History is just one f*****g thing after another.? ...read more.