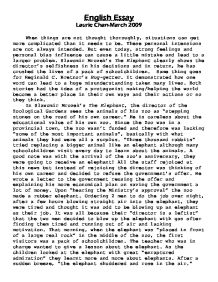 English Essay Laurie Chan-March 2009 When things are not thought thoroughly, situations can get more complicated than it needs to be. These personal intensions are not always intended. But even today, strong feelings and personal bias influence can cause a little mistake and lead to a larger problem. Slawomir Mrozek's The Elephant clearly shows the director's selfishness in his decisions and in return, he has crushed the lives of a pack of schoolchildren. Same thing goes for Reginald C. Bretnor's Bug-getter. It demonstrated how one word can lead to a huge misunderstanding taken many lives. Both stories had the idea of a protagonist making/helping the world become a better place in their own ways and their actions or so they think. In Slawomir Mrozek's The Elephant, the director of the Zoological Gardens sees the animals of his zoo as "stepping stones on the road of his own career." ...read more.

It was all because their "director is a leftist" that the two men decided to blow up the elephant with gas after finding them tired and running out of air and lacking motivation. That morning, when the elephant was "placed in front of a large real rock" in the middle of the zoo, the first visitors was a pack of schoolchildren. The teacher who was in charge wanted to give a lesson about the elephant. As the children looked at the elephant with great "enraptured admiration" they learnt more and more about elephants. After a sudden breeze, "the elephant shuddered and rose in the air." This clearly showed that the there is no real elephant. As a result, the public gets hurt. It is completely a waste of people's money and time. The zoo staff thought that they could fool the public by replicating the real thing but in reality they were only making a fool out of themselves. ...read more.

So, for two years, the exterminator had being killing critics instead of crickets. In this case, Goshawk thought the exterminator was fake and didn't do anything at all. Obviously it wasn't worth his money because the job was never done. So, both the director and the exterminator thought that they could change the world by their careers. One thought that it would be a genius idea to have a fake elephant on display instead of the real one. And the other one was supposed to get rid of bugs to better one's comfort but instead misunderstood and went out killing many people with the title critic. By the actions of the director's selfishness, he had ruined his reputation and neglected the studies of the children. Again by misunderstanding of the exterminator, not only had he frustrated Goshawk but had killed many innocent lives. Little things that are taken for granted need to be carefully thought about before actually acting, that way, things don't end up in a huge mess! ...read more.