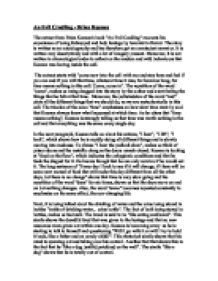 The extract from Brian Keenan's book &quot;An Evil Cradling&quot; recounts his experience of being kidnapped and help hostage by terrorist in Beirut.

An Evil Cradling - Brian Keenan The extract from Brian Keenan's book "An Evil Cradling" recounts his experience of being kidnapped and help hostage by terrorist in Beirut. The story is written as an autobiography and has therefore got an omniscient narrator. It is written very descriptively and with a lot of imagery present. Moreover, it is not written in chronological order to reflect on the random and wild behaviours that Keenan was having inside the cell. The extract starts with "come now into the cell with me and stay here and feel if you can and if you will that time, whatever time it was, for however long, for time means nothing in this cell. Come, come in". The repetition of the word "come", makes us being dragged into the story by the author and start feeling the things that he felt at that time. Moreover, the polisindeton of the word "and" plots all the different things that we should do, as we are metaphorically in this cell. The tricolon of the noun "time" emphasises on how slow time went by and that Keenan always knew what happened at which time. As he utters that "time means nothing", Keenan is strongly telling us that time was worth nothing in the cell and that everything was the same every single day. ...read more.

The same thing becomes demonstrated a few lines after, when he says "It is as if we are running down a long empty tunnel looking for something that we left behind but cannot see in the blackness". This simile also shows that everything is horrible and that no nice things become true in this tomb. Keenan articulates that "it must be time to eat". This shows that during the amount of time he was held as a hostage, he evolved a internal clock that told him when it is time to do what. Moreover, he starts questioning all different kind of unimportant things, as he has nothing to do "How someone decided once to call that part of the egg 'albumen'". Keenan shows that he needs to stay focused to survive as he says "I must ration my drinking... if I were to knock over this water-bottle there would be nothing I could do...". This shows that any little mistake can lead to him going mad and eventually dying. The cell he is in is described as a "tomb... under the ground". This makes us think of him being in a coffin and buried under earth, already being dead. The next part begins with "Then it begins, I feel it coming from out of nowhere. ...read more.

The assonance of "i's" in "insects is insidious" emphasise the sound of the small insects zumming around his head and providing him with a sleepless night. The bites felt for Keenan "like a shroud". This simile is very strong as we directly think of death, in contrast with the shroud. As a shroud covers the whole body, so did the mosquito bites. In the final sentence, Keenan states that he would "let the mosquitoes feed and hope that [they would] ha[ve] a fill of [him]". This shows that he has in a way given up the fight against these creatures and knows that he cannot do anything about getting bitten. Frustration is exceedingly shown in this last extract. The extract from "An Evil Cradling" by Brian Keenan was very evocative and made the audience feel in the same way as he did, when he was a hostage in Beirut. The story was set up in many small paragraphs, showing all different things that were going on and the uncertainty of his well-being. A lot of the word "I" is being used to emphasise on all the different things that were going on and that everything happened to only him at that certain moment. Overall, I found his writing very effective as he wants to drag us into the story using metaphors and repetition. He is being very descriptive, trying to portray the surrounding he was 'living' in as contemplative as possible. ...read more.