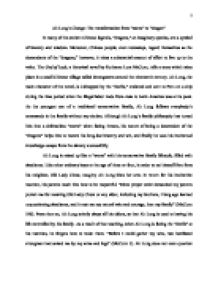 The God of Luck, a historical novel by Ruthanne Lum McCunn, tells a story which takes place in a small Chinese village called Strongworm around the nineteenth century.

Ah Lung's Change: The transformation from "worm" to "dragon" In many of the ancient Chinese legends, "dragons," an imaginary species, are a symbol of bravery and wisdom. Moreover, Chinese people, even nowadays, regard themselves as the descendants of the "dragons;" however, it takes a substantial amount of effort to live up to the value. The God of Luck, a historical novel by Ruthanne Lum McCunn, tells a story which takes place in a small Chinese village called Strongworm around the nineteenth century. Ah Lung, the main character of the novel, is kidnapped by the "devils," enslaved and sent to Peru on a ship during the time period when the illegal labor trade from Asia to Latin America was at its peak. As the youngest son of a traditional conservative family, Ah Lung follows everybody's commands in the family without any doubts. Although Ah Lung's family philosophy has turned him into a defenseless "worm" when facing threats, his nature of being a descendant of the "dragons" helps him to restore his long-lost bravery and wit, and finally he uses his instinctual knowledge escape from the slavery successfully. Ah Lung is raised up like a "worm" with his conservative family lifestyle, filled with obedience. ...read more.

He does not know what is he going to face and he feels scared because anyone on the "devil ship" could hurt him. Despite Ah Lung's acting as weak as a "worm" within his families, he tend to more independent when he is alone. He turns to his instincts when he is in a more dangerous later in the novel, the nature of the descendents of "dragons." While he was little, nobody had told him to defense for himself; however he knows that "a Chick needs no explaining to know it's been snared by a hawk" (McCunn 4) when the Old Lay Chow wouldn't let him get off to the ground. This is his nature of bravery for being a descendent of "dragons." Similarly on the "devil ship", the "devils" are trying to make everyone to sign a labor contract. Clearly, Ah Lung feels that he might lose he freedom forever as soon as he signs the labor contract. One of his instincts, bravery, comes up to him and encourages him to reject the "devils". In the novel, it is the first time that Ah Lung has challenged the "devils" directly on an issue. ...read more.

At the end of the story, Ah Lung uses his instinctual knowledge successfully escapes from the "devil" island. "By clever planning (McCunn 199)," the wits pass on from Moon girl Ah Lung chooses the Mexican ships to escape. Because they are independent from the island since they are food suppliers for the island instead of the guano collectors that dependent on the island. In that way they will have less chance to alert the "devils." Afterward, he shows great bravery. As his peers speak to him, "Are you crazy?" "You will get shot" (McCunn 199) He does not hesitated, but taking a great deal of risk of getting shot to get off the "devil island." And he finally succeeds. By planning ahead and taking life as risk, he combines his wits and bravery together and becomes the truly a descendent of the "dragons." Reconsidering Ah Lung's first twenty years of life, his family has taught him into a passive boy who does not know how to take control of his life. He was like a "worm." Nevertheless, after experiencing the slavery, Ah Lung is a changed man. He transforms from a defenseless "worm" into a brave, witty "dragon." After finishing the book God of Luck, readers probably will recognize this book as another remarkable Chinese legend. 1 ...read more.