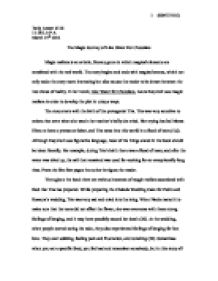 Tariq Ameer #116 11-IB Lit P-A March 15th 2012 The Magic Journey of Like Water For Chocolate Magic realism is an artistic, literary genre in which magical elements are combined with the real world. The story begins and ends with magical scenes, which not only make the story more interesting but also causes the reader to be drawn between the two views of reality. In her novel, Like Water for Chocolate, Laura Esquivel uses magic realism in order to develop the plot in unique ways. The story starts with the birth of the protagonist Tita. Tita was very sensitive to onions that even when she was in her mother's belly she cried. Her crying has led Mama Elena to have a premature labor, and Tita came into this world in a flood of tears (5,6). Although Esquivel uses figurative language, most of the things stated in the book should be taken literally. For example, during Tita's birth there was a flood of tears; and after the water was dried up, the salt that remained was used for cooking for an exceptionally long time. ...read more.

Tita expresses her emotions though her food, like a musician conveys his feeling through music. Another way of how magic blends together with food is when Tita drank the ox tale soup. Tita was mentally unstable, and hasn't spoken for six months. When Chencha brought Tita some ox-tail soup, her senses came back to her. This proves that the ox-tail soup can cure any illness whether physical or mental (123). Without magic realism Getrudis would have not ran away and Tita wouldn't have been cured. Other instances where magic mixes with reality is when the ghosts appear. Throughout the novel Tita encounters several ghosts including Mama Elena, Nacha, and Morning Light. The first ghost she encounters is Nacha's spirit after she dies. While preparing the food, Nacha's spirit dictated the recipe, helping and comforting Tita at the same time (50). The second time was when Rosaura was giving birth to Roberto. Tita prayed for Nacha's help, and suddenly Nacha's spirit appeared and guided her safely to bring the baby into the world (72). ...read more.

At the very end of the story Tita and Pedro make love for the first time without any worries. The experience is intensely strong, that Pedro's matches are all lit at the same time that he dies. Tita realized that if she doesn't calm down then the same thing would happen to her, so she relaxes. She then realizes that she wants to go with him into the tunnel so she literally eats the candles and enters the tunnel with him. In the end, their spirit bodies create a spark, which causes the whole ranch to burn to the ground (243). Like Water for Chocolate is best known for its use of magical realism. Magic realism is literary device that incorporates myth and supernatural themes into realistic settings and plots. Laura Esquivel uses this device to expand and unfold the plot in unique ways. Magic realism is also blended with the major themes of the novel such as tears, tradition, food, and love. Tariq Ameer Candidate #116 World Literature Assignment #1 April 7, 2012 Word count: 1154 ?? ?? ?? ?? 1 (000773116) ...read more.