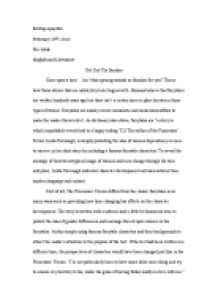 The Message of &quot;The Princesses Forum&quot; by Linda Kavanagh

﻿Berfug Apaydin February 29th, 2012 Ms. Solak English and Literature Get Out The Borders Once upon a time? Isn?t this opening sounds so familiar for you? This is how those stories that are called fairytales begins with. Humans believe that fairytales are written hundreds years ago but there isn?t a certain time or place locates in those types of stories. Fairytales are mainly covers unrealistic and miraculous affairs to make the reader throw into it. As dictionary also states, fairytales are ?a story in which improbable events lead to a happy ending.?[1] The author of the Princesses? Forum Linda Kavanagh, is simply protesting the idea of women dependency on men to survive in her short story by including a famous fairytale characters. To reveal the message of how stereotypical image of women and men change through the time and place, Linda Kavanagh indicates character development and uses satirical tone, modern language and content. First of all, The Princesses? Forum differs from the classic fairytales in so many ways such as providing how time changing has effects on the character development. ...read more.

I get awfully scared sometimes, but I?ve never been able to tell anyone else. I thought I was the only man who ever felt that way.?(page 38) Finally, if time and place changes, story changes and readers can observe this by the character development. Secondly, in some how author?s perspectives, culture and the atmosphere that they live in have shaped almost all of the stories. The author may or may not want to reveal his/her ideas into story but generally readers can identify those little pieces while reading. As stated before, The Princesses? Forum written with a satirical tone and some characters are simply reflecting the author?s feminist view especially Sleeping Beauty and Cinderella. ? ?Kingdom? repeated Cinderella. ? Now, there?s a word I object to. Why shouldn?t it be Queendom??? Also while reading the story, readers can easily identify that the text is written by a woman because of the feminist tone in some of the character?s speech. ...read more.

Again in the Sleeping Beauty speech, ? But it?s actually the plot of our stories in reverse?(page 37) and also in the Snow White?s respond ? We?re tired of behaving the way stereotyped princesses are supposed to. We?re going to behave as we want from now on.?(page 38) is clearly observed that by using our and we in italics, the author tries to create group identity and takes the reader in it since the word of ?we? represent all of the women in the world not just the characters in the story. So that, the author addressing to all women and men who are the victims of stereotyping. To sum up, Princesses? Forum by Linda Kavanagh mainly protesting how unrealistic fairytales creates a stereotyped image of women and men. The culture, traditions and society?s values have been changing a lot since 17th century so that the text is completely changing based on those elements. The usage of modern language, satiric tone and the structure of the story differs it from the classic fairytales and makes it extraordinary. ...read more.