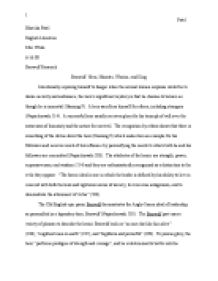 The Old English epic poem Beowulf demonstrates the Anglo-Saxon ideal of leadership as personified in a legendary hero,

﻿Patel Bhavika Patel English Literature Mrs. White 6-16-08 Beowulf Research Beowulf: Hero, Monster, Warrior, and King Intentionally exposing himself to danger when the normal human response would be to desire security and endurance, the hero?s significant mystery is that he chooses to behave as though he is immortal (Hanning 9). A hero sacrifices himself for others, including strangers (Napierkowski 514). A successful hero usually receives glory for his triumph of will over the awareness of humanity and the nature for survival. The recognition by others shows that there is something of the divine about the hero (Hanning 9) which makes him an example for his followers and receives much of his influence by personifying the merits to which both he and his followers are committed (Napierkowski 503). The attributes of the heroic are strength, power, expressiveness, and wisdom (514) and they are enthusiastically recognized as a distinction to the evils they oppose. ?The heroic ideal is one in which the leader is defined by his ability to live in concord with both the laws and righteous norms of society, to overcome antagonism, and to demonstrate the attainment of virtue? (503). ...read more.

Grendel not for his own glory but ?to heighten Hylgelac?s fame? (435). Good warriors are rewarded with God-given goods by their kings for their merit and worthiness. Good warriors are greatly respected by the kingdom and the warrior society (Napierkowski 506). In a warrior society, the relationship between good warriors is of deep significance (Greenblatt 27-28). A good warrior would not engage in thoughtless bloodshed because the meaningless killing of one?s own blood is the ultimate unthinkable with the warrior (Napierkowski 507). ?If one of his kinsmen had been slain, a warrior had a moral responsibility either to kill the slayer or to exact the payment of man-price in compensation. The failure to take revenge or to exact compensation is considered disgraceful.? In the Old English epic poem Beowulf, ?Hrothgar?s torture over the murders committed by the ?greedy and grim? (122) Grendel is not only for the loss of his good warriors but also for the shame of his inability either to kill Grendel or to exact a ?death-price? from the killer.? When the ?monstrous h**l-bride? (1259), Grendel?s mother, beheads Hrothgar?s highest placed advisor, Aeschere, Hrothgar is terrified by the revenge killing of his old friend (Greenblatt 28). ...read more.

She tells him that he is ?Such a strong man with the strength of a king, the king you will one day become.? Soon Beowulf?s arrogance and bravery compels him to generate erroneous decisions. Subsequent to Beowulf lies about Grendel?s mother?s death, Hrothgar declares Beowulf his successor and commits suicide, leaving his kingdom and his young beautiful queen as Beowulf?s reward and responsibility (Zemeckis). Several years later, even though he became the king by wicked motivation, the aged Beowulf still has the good warrior attitude searching for a line of attacks to be a hero again. When the dragon, his sinful son, attacks his kingdom, Beowulf prepares to fight the battle, showing that he, in spite of everything, has the good warrior manner. He ignores the fact that a king should by no means openly fight in a battle and tries to kill the dragon and succeeds; however, he dies by his corrupt son. Beowulf?s death is mourned like every good king?s and good warrior?s. Both in the poem and the film, Beowulf portrays a better warrior than a king due to his faithful warrior characteristics (Zemeckis). ...read more.