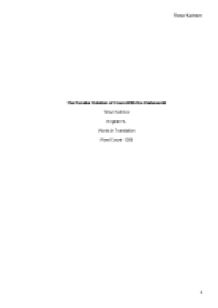 The Peculiar Relation of Creon With the Underworld

﻿Timur Karimov The Peculiar Relation of Creon With the Underworld Timur Karimov English HL Works in Translation Word Count: 1358 ________________ In the Greek tragic play Antigone written by Sophocles, The king of Thebes, Creon does not feel confident despite seemingly unlimited power. He publicly announces his decision to capitally punish an offender of his order. The sole offender, Antigone, Polynices? sister, is caught and brought to him for judgment. Nevertheless, she behaves provocatively, yet Creon hesitates to bring her to death. He is building his arguments in conversations with Antigone, the chorus and his son Haemon as if he is not sure that he is right, or does not have enough authority to do it, or both. At one moment, driven by rage, Creon wants to execute Antigone in the presence of his son, but later withdraws his intention. His decision to bury Antigone alive is not only contentious and awkward, but also incomplete and potentially reversible. Creon gives the impression that he wants to offer Antigone a choice. Why does he do it and why is he so controversial in his attitude to Antigone?s punishment? This essay uncovers the weaknesses of his character that explains his behavior. Creon?s inconsistent attitude towards death and burial reveals a controversial and a vulnerable character hidden under the mask of an autocratic ruler. ...read more.

When Haemon exits the stage, Creon crafts Antigone a bizarre punishment to ?wall her up alive/in a rocky vault, and set out short rations??[5] Such penalty looks incomplete and potentially reversible. It is odd to see a king undo his decision in a matter of minutes. Creon is however not without a reason: simultaneously, he releases Antigone?s sister, Ismene, ?the one whose hands are clean?.[6] There must be a reason for Creon?s awkward change of course. He seems to be torn between the demands of his king?s duties and his increasing indecisiveness. There is powerful symbolism present in his act: Creon has prior ordered that the dead body of a traitor Polynices be left unburied and has now arranged the entombment of Antigone alive. Creon appears here as a weak and controversial character and the author provides further evidence of this when Antigone is taken to her custody. Parting with Antigone, Creon in a few lines reveals the ultimate reason for his perverse verdict. In this act, his orders are finally served. Polynices lies bare in the heat with no one left to bury him; Antigone is walled in her tomb; the Chorus is supportive as ever. What else would Creon want? As he openly says for himself, ?[Creon?s] hands are clean?.[7] Creon did not execute Antigone, moreover he left her a precarious choice ? ?death or buried life with a good roof for shelter?.[8] Creon?s actions reveal that he left the choice for himself instead: to reconsider. ...read more.