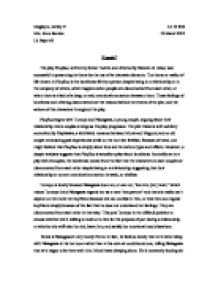 The play Fireflies, written by Suzue Toshiro and directed by Ricardo G. Abad, was successful in presenting its theme by the use of its dramatic elements.

Maglaqui, Ashley P. Lit 14 R56 Mrs. Irene Benitez 10 March 2012 Lit Paper #2 "Lonely" The play Fireflies, written by Suzue Toshiro and directed by Ricardo G. Abad, was successful in presenting its theme by the use of its dramatic elements. The theme or reality of life shown in Fireflies is the loneliness felt by a person despite being in a relationship or in the company of others, which happens when people are disconnected from each other, or when there is a lack of a deep, or real, emotional connection between them. These feelings of loneliness and of being disconnected are the reasons behind the events of the plot, and the actions of the characters throughout the play. Fireflies begins with Tomoyo and Nakagawa, a young couple, arguing about their relationship. More couples emerge as the play progresses. The plot thickens with adultery committed by Hayakawa, a whirlwind romance between Murai and Megumi, and an old couple reminiscing past experiences while on the hunt for fireflies. Because of these, one might believe that Fireflies is simply about love and its various types and effects. However, a deeper analysis suggests that Fireflies is actually a play about loneliness. Ironically set in a play full of couples, the loneliness comes from the fact that the characters in each couple are disconnected from each other despite being in a relationship, suggesting that their relationship or current emotional connection is weak, or shallow. ...read more.

And by observing their behavior and listening to what they say, one can determine or predict the characters' future intentions. Tomoyo and Nakagawa's arguments involve the occasional "what's that supposed to mean?" and "what's your point?" coming from Nakagawa. This clearly shows that he lacks an emotional connection with Tomoyo because he did not understand what she wanted from him, which would lead her to choose the path that eventually leads to her spending the night at a love motel with Hayakawa. Meanwhile, Murai is so desperate to find company that he would date just about anyone. He can no longer afford to be picky because the loneliness is too much for him, which is why he strives to make a date with Megumi even though he insultingly called her "fat" when speaking to Nakagawa alone. Murai always tries to catch Megumi's attention but she is too attracted to Nakagawa to notice him, and hardly batted an eyelid at Murai's efforts. And yet, she agrees to go on a date with him, suddenly appearing at the restaurant. Her reason for agreeing to this could possibly be related to the eternal "pattern" she kept mentioning. The fact that these two characters have "reasons" for entering the relationship foreshadows another disconnected relationship, a relationship that wouldn't work since both are only in it for the gain. ...read more.

It does not need improvement, but is somewhat lacks enthusiasm, perhaps on the part of Nakagawa. Murai seeks company from him, but he seems not to care about Murai's loneliness. The banana juice Hayakawa ordered at the restaurant on his date with Tomoyo was "watery" which could mean the relationship he was trying to build with Tomoyo lacked flavor, or real emotion, which is true because we find that he was only after her for s*x. Murai also mentions-on his date with Megumi in that same restaurant-that the banana juice was a "famously bad drink" which could refer to the immoral act of having a relationship just for s*x. Moreover, the fact that Murai ordered this drink as well reflects how Murai treats Megumi, too. The drinks as a symbol for relationships is used appropriately since people often meet, socialize, and develop relationships over drinks. And the act of drinking relationships gives the image of a person quenching their emotional thirst, which, in Fireflies, is loneliness. It's easy to mistake Fireflies to be a play about love: how it's lost, how it's found, and how it's faked. But Fireflies is a play more about loneliness and disconnection than love. How these people cope with loneliness, and their attempts to establish a connection with others in the attempt to get rid of it is presented very well in the play through its plot, characters, dialogue, and symbols. ...read more.