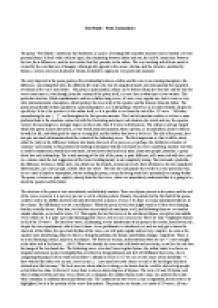 The poem Two Hands, written by Jon Stallworty, is a piece of writing with a modern structure and a relatable, yet very personal theme.

﻿Two Hands ? Poem Commentary The poem ?Two Hands?, written by Jon Stallworty, is a piece of writing with a modern structure and a relatable, yet very personal theme. It deals with a delicate topic, the relationship between father and son, the lack of connection between the two, their differences, and the insecurities that they provoke in the author. The very touching and delicate mood is created by the excellent use of imagery, which greatly appeals to the senses, diction, and the structure, enriched by rhymes, caesuras and a lot of phonetic details, included to emphasize very particular emotions. The story depicted in the poem, portrays the relationship between a father and the son, in an evening atmosphere, the difference concerning their jobs, the different life styles, the way of using their hands, and subsequently the inexplicit revelation of the son?s insecurities . The poem is quite modern, which can be deduced from the structure and the way the verses interconnect, even though, from the content of the poem itself, it is not clear in what times it was written. This particular structure, filled enjambements, and ten syllables long verses, it?s not a very regular one, but it creates a very slow and melancholic atmosphere, which portrays the insecurity of the speaker and the distance from his father. ...read more.

The verses 18 and 19 rhyme, and after reading all of the previous verses which are so irregular, the sudden rhyme really comes out, and hits the reader, who?s attention is suddenly drastically drawn back. The content of the two verses is not so important, that it needs to be highlighted, but it is the position of the verses that matters. The poem has no stanzas, it is made of 20 verses, all very connected, due to the many enjambments, so when the end of the poem is almost reached, as in a music composition, the last verses, are slowed down, to draw attention to the them, to conclude the reading of the poem more slowly, and paying more attention to the last verse. The effect is achieved even more with end stops at each of the last 3 verses. As stated earlier, the almost every line has an enjambment, it is a very simple, yet effective device, which, in this case, is used for different purposes. One is to make the rhythm a bit less regular, and to slow it down a bit, making it more calmer, despite the opposite feelings in the speaker?s mind. Another purpose, more relevant for this specific poem, is to reflect a stream of consciousness that the speaker is experiencing. ...read more.

Despite its simplicity, due to its very rich and interesting structure, and figurative language, it really provokes strong feelings. This can be noticed the most in the last part, specifically, in the last verse, when, after the slowing of the rhythm, and the preparation for the end, there is a change is dynamic. During the whole poem, it seems as if the author was mesmerized by his thoughts, and everything around him was still, and the environment disturbed by no external influence. In verse, 19 however, this changes, the phone rings, and we are shook by it, so is he, the train of thoughts stops for a moment, and then he concludes the poem by saying ? he will be our again?. With this he means, that the father is going out, he has to fulfill his duty of being a doctor. This last, seemingly simple statement, however, leaves us with an uncomfortable feeling. We can sense an increasing sense of increasing preoccupation, anxiety, but also release of tension that occurs in the speaker?s mind, due to the father leaving to go to the hospital. He knows that being alone in the house, knowing that his father is saving lives, will provoke even more frustration and restlessness in him, but at the same time, he feels relieved from his father?s oppressing presence. These subtle but very present emotions, that the poem incites, are what makes this piece of work, a good poem. ...read more.