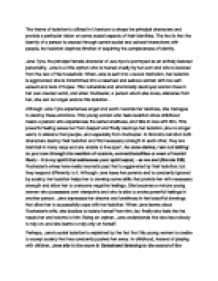 The Theme of Isolation in Jane Eyre

The theme of isolation is utilized in Literature to shape the principal characters and provide a particular vision on some crucial aspects of their identities. The fact is that the identity of a person is created through certain social and cultural interactions with people, but isolation deprives him/her of acquiring the completeness of identity. Jane Eyre, the principal female character of Jane Eyre is portrayed as an entirely isolated personality. Jane is a little orphan who is treated cruelly by her aunt and who is isolated from the rest of the household. When Jane is sent into Lowood Institution, her isolation is aggravated; she is transformed into a reserved and serious woman with low self-esteem and lack of hopes. ...read more.

In Bronte's narration both characters destroy their isolation and find necessary strength in each other, they are identical in many ways and are unable to live apart. As Jane claims, I am not talking to you now through the medium of custom, conventionalities or even of mortal flesh; - it is my spirit that addresses your spirit equal, - as we are! (Bronte 238). Rochester's wives have really traumatic past that is aggravated by their isolation, but they respond differently to it. Although Jane loses her parents and is constantly ignored by society, her isolation helps her to develop some skills that provide her with necessary strength and allow her to overcome negative feelings. She becomes a mature young woman who possesses own viewpoints and who is able to evoke powerful feelings in another person. ...read more.

In childhood, instead of playing with children, Jane sits in the room in Gateshead listening to the sound of the piano or harp played below the jingling of glass the broken hum of conversation (Bronte 21). She is prohibited to enter the drawing room; only these sounds unite Jane with the world. Such isolation deprives Jane of any social interactions with other children or adults, resulting in her loneliness. As Jane claims, Long did the hours seem while I awaited the departure of the company, and listened for the sound of Bessie's step on the stairs (Bronte 22). Bessie is the only person in this house who helps Jane to endure her complex position. Further in the school Jane meets Helen Burns and Miss Temple, the persons who have greatly influenced the character's identity. Due to their close relations, Jane starts to feel warmth, love and sympathy, gradually destroying her negative feelings. ?? ?? ?? ?? ...read more.