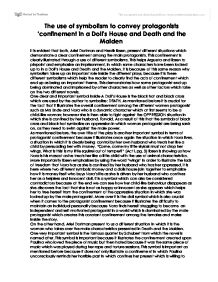 The use of Guns in death and the maiden and One day of life to portray the protagonists struggle for power.