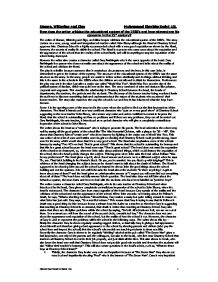 The writer of Unman, Wittering and Zigo, and Giles Cooper criticises the educational system of the 1950s. The story centres on a new, young, weak and inexperienced teacher called John Ebony although the Head at Chantrey School approves him.

Unman, Wittering and Zigo Mohammed Ebrahim Badat 10L How does the writer criticise the educational system of the 1950's and how relevant are his concerns in the 21st century? The writer of Unman, Wittering and Zigo, and Giles Cooper criticises the educational system of the 1950's. The story centres on a new, young, weak and inexperienced teacher called John Ebony although the Head at Chantrey School approves him. Chantrey School is a highly recommended school with a very good reputation as shown by the Head, however, the secrets of reality lie within the school. The Head is a person who cares more about the reputation and the appearance of the school than the reality of the school itself, and will do anything to stop the reputation of the school being destroyed. However the writer also creates a character called Cary Farthingale who is the exact opposite of the head. Cary Farthingale is a person who does not really care about the appearance of the school and talks about the reality of the school and criticises the Head. The play is a thriller because someone dies in mysterious circumstances and the hero, in this case John, is determined to get to the bottom of the mystery. The structure of the educational system of the 1950's was the same structure as the army. In the army, people are made to follow orders obediently and do things without thinking and this is the same in the schools in the 1950's when the children are not allowed to think for themselves. Furthermore the play was set in the time just after a major war called "World War Two". World War Two saw the rise of the political system of fascism, which was quite new at the time. The army consisted of roles and statuses like privates, corporals and sergeants. This was like the relationship in Chantrey School between the head, the heads of departments, the teachers, the prefects and the students. ...read more.

The writer shows how hard it is for John to take back his authority when the students of Lower 5B frequently interrupted him and threatened to kill him just like the students said they did to their former teacher Mr Pelham in the previous lesson. The writer shows what happens when John becomes more authoritarian. John tries to take back his authority by being more authoritarian, cooperating less with the students and not talking with the students about what had happened the previous lesson. An example of this is when the students are misbehaving and when the head walks into the classroom, the students pretend to be working and cooperating with the teacher. When talking about Mr Pelham's death, Cuthban says "I mean to say, sir, we can prove it. There are at least two witnesses for every member of the form." After this, the head enters room and then Cuthban pretends to be working by reading aloud from the history textbook in front of the class saying "The Battle of St. Albans, 1455, The Battle of Wakefield, 1461."This is where the students pretend to be working in front of the head. Also, the head does not even bother to check in the students' exercise books to see if and how much work the students have done. When talking Nevertheless, the students remind John of what they had talked about the previous lesson and show John evidence that they killed Mr Pelham by showing John, Mr Pelham's wallet with a picture of his niece inside the wallet. The students take back the authority that was taken away from John to the students. The students are more experienced to the head's way of running the school than John so the students can easily control John. Furthermore, John is trying to impress the head by following his system of running the school. John shows that he is in full control and is a good teacher because he identifies and corrects Cuthban's mistake in front of the head. ...read more.

The writer Giles Cooper refers to Chantrey School as a criticism of the educational system of the 1950's. The writer makes the other students act like sheep, however, the students in Lower 5B are individuals and think for themselves. All the other students in the other classes are not allowed to think for themselves. The schools of the 1950's are training students for the army. At the end of the play, the audience realise that the "morale" or the "lesson" of the story is that the writer Giles Cooper is trying to criticise authoritarianism. The audience also learn that the students who murdered their former teacher are in fact victims themselves because they have relied on the rule of authority in school, which has demanded blind obedience to the rule of law of teachers. This is also supported by Cary Farthingale as he also states, "Authority, my old Ebony, is a necessary evil, and every bit as evil as it is necessary." The unanswered question for the audience at the end of the story is that, "How can there be a balance in school between the need for pupils to think more independently and act more morally? The relevance of the educational system of the 1950's and the 21st century is that authority still exists but there is a lower level of authoritarian teaching. In the 21st century, more people use psychological means of discipline and less people use physical means f punishment. Although, the hidden curriculum and labelling still exists in the 21st century. There are stricter laws on physical punishment in the 21st century. However, authoritarian teaching still exists in the 21st century. Yet, nowadays, more people are known to mess about in schools than in the 1950's according to exclusions and experience from an ex-student who was taught in the educational system of the 1950's is now a teacher and says "more people nowadays mess-around. If it was us lot, then we would have got the cane up our backsides." ?? ?? ?? ?? Mohammed Ebrahim Badat 10L 1 ...read more.