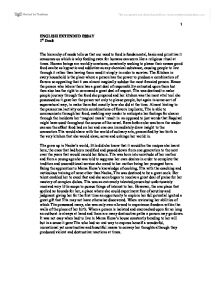 Theme of Food and Magical Realism in Like Water for Chocolate

ENGLISH EXTENDED ESSAY 1st Draft The hierarchy of needs tells us that our need to feed is fundamental, basic and primitive it consumes us which is why feeding even for humans can seem like a religious ritual at times. Human beings are worldly creatures, constantly seeking to please their senses good food can be as hypnotic and addictive as any chemical substance, causing people to live through it rather than having them need it simply in order to survive. The Kitchen in every household is the place where a person has the power to produce a combination of flavors so appealing that it can almost magically subdue the most frenzied person. Hence the person who labors there has a great deal of responsibility entrusted upon them but then also has the right to command a great deal of respect. Tita was destined to make people journey through the food she prepared and her kitchen was the most vital tool she possessed as it gave her the power not only to please people, but again in some sort of supernatural way, to make them feel exactly how she did at the time. Almost hinting to the paranormal activity certain combinations of flavors implicate, Tita is able to communicate through her food, enabling any reader to anticipate her feelings far clearer through the incidents her 'magical meals' result in as opposed to just words that Esquivel might have used throughout the course of the novel. Even before she was born the reader can see the effect food had on her and one can immediately draw insight to the connection Tita would share with the world of culinary arts, personified by her birth in the very kitchen that she would slave, serve and unhinge her world in. Tita grew up in Nacha's world, little did she know that it would be the recipes she learnt here, the ones that had been modified and passed down from one generation to the next over the years that would mould her future. ...read more.

The preparation of Food definitely has therapeutic properties that help to calm Tita down and cooking being the mainstream of her life, there is no doubt in my mind as to why it takes a familiar dish to lift her spirits almost directly stating the importance of cooking to her day to day health and this establishes the fact that Tita's health is also in direct correlation with the time she is able to spend in the Kitchen. Tita is unable to discuss or explore her s****l desires and urges and therefore, many a time her food acts as a channel for her frustration taking on the form of a powerful aphrodisiac. Her physical needs have been suppressed for far too long and Tita is ready to explore her body, she is curious and she is desperate but to no avail as Mama Elena's eyes never once leave her and Pedro unnoticed. Although Tita is young, the aphrodisiacal nature of her food describes literally just how desperate and willing she is and had the food not been able to communicate that properly, Pedro would not have had the courage to make his move A person's true identity is probably the greatest mystery in the world to everyone else. People will always claim to be honest but how can one ever know whether someone is telling the truth or not. In the end it comes down to trust and sometimes it pays off if your lucky but most often not and most people end up breaking your trust which makes the concept invalid no matter what the reason. People do eventually discover the true nature of their family and friends but the question I think one has to ask is why all this actually realized. "Actions speak louder than words" We learn about other people best when we see the way to react to situations or by their actions which ultimately reflect their true nature. ...read more.

Although it is almost as if her passion receives a negative connotation which is why people receive controversy and an outburst of negative emotions once her food has been consumed, it is only because Tita is only able to let go and be free in the kitchen. It is at this point where her expressiveness is at its peak and sadly Tita has a lot of disturbing things to express. However, Tita is also able to communicate her joy and happiness when the few moments of her day allow it. Her ability to cook transforms Esquivel's words into a sort of film within the novel as every emotion is accounted for by a role play of emotion that helps any reader to come to a much clearer conclusion of events in the novel. Tita's constant back breaking work helps define her as a woman of great substance. Capable of replicating any emotion via a careful selection of ingredients she is truly a sorcerer and possesses qualities any woman can be proud of. We see emerging as a more confident individual throughout the course of the novel and had it not been for her belief in the power she had developed, Tita would not have been as refined and clear about the life she wanted. Her confidence that developed as a result of her faith in herself helps her to overcome a great deal of tragedy achieving her dreams and to some extent completing dreams that others close to her may have wanted done .There are few scenes where food does not play a role. Food is plentiful throughout the story. The responsibility of food seems to overshadow the roles of the rest of the characters in the story, without the use of this food to convey an added sense of power over the story. Tita communicates her feeling through the food, and she really seems to transform the food with her own emotions. 1 ...read more.