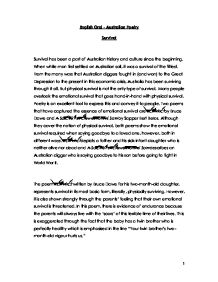 Two poems that have captured the essence of emotional survival are Katrina by Bruce Dawe and A Soldiers Farewell to his Son by Sapper Bert Beros. Although they cover the notion of physical survival, both poems show the emotional survival required when

English Oral - Australian Poetry Survival Survival has been a part of Australian history and culture since the beginning. When white man first settled on Australian soil, it was a survival of the fittest. From the many wars that Australian diggers fought in (and won) to the Great Depression to the present in this economic crisis, Australia has been surviving through it all. But physical survival is not the only type of survival. Many people overlook the emotional survival that goes hand-in-hand with physical survival. Poetry is an excellent tool to express this and convey it to people. Two poems that have captured the essence of emotional survival are Katrina by Bruce Dawe and A Soldier's Farewell to his Son by Sapper Bert Beros. Although they cover the notion of physical survival, both poems show the emotional survival required when saying goodbye to a loved one, however, both in different ways. Katrina depicts a father and his sick infant daughter who is neither alive nor dead and A Soldier's Farewell to his Son describes an Australian digger who is saying goodbye to his son before going to fight in World War II. ...read more.

A Soldier's Farewell to his Son by Sapper Bert Beros, an Australian soldier who fought on the Kokoda Track in World War II, deals with the same issue of a parent, in this case a father, saying goodbye to his child, however, in a different way. Unlike Katrina which deals with the parents reaction to the event, this poem is more about the father going to fight in World War II and wishing and hoping that the son never has to go through what he is about to. It is understood that the man does not think he will be home for a while, if at all, and that this may be the very last time he will see his son. This is indicated through the line "your mother is your daddy now", showing that the child will no longer have a father around and, as such, he will look to his mother to fill that void. It is also shown that he thinks he may die when he says "in mother's care - till stars again from peaceful heaven smile". Also, in the last stanza when he says "I must give up your tender years, the joys ill sorely miss" the father ...read more.

Both poems indicate parents wanting to do everything they can for their children. However, in Katrina the parents feel helpless, knowing nothing they do is going to help and in A Soldiers Farewell to his Son, the father feels that going to war and risking his life is the only way he can save his son's. Although these poems are so different, they depict the same essence of survival in that both poems describe the parents' need to survive. Both of these poems depict two completely different ways of dealing with the need for survival. They discuss both physical and emotional survival, something that has been very much a part of the Australian history and culture since it first began. Australians are survivors. We still have soldiers fighting and surviving wars, we still have parents surviving the death of children and there are still people coping with the challenges of everyday life. Katrina and A Soldier's Farewell to his Son are true examples that poetry is timeless and that 30 or even 50 years after they were written, they are still just as meaningful and as applicable today as they were all those years ago. If one looks back through Australia's history, it becomes very obvious that Australians truly are survivors. ?? ?? ?? ?? 1 ...read more.