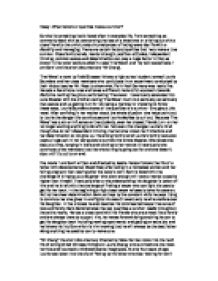 What factors or qualities make a survivor? Examples from the novel weve studied in class The Wave and my two related texts I am Sam and the short documentary Mr Cheng.

Essay - What factors or qualities make a survivor? Survival is something that's faced often in everyday life. From something as commonly dealt with as overcoming the loss of a loved one or a falling out with a close friend to the unfortunate circumstances of facing every day life with a disability and managing. There are certain factors/qualities that help make a true survivor. Close family bonds, mental strength, positive attitudes, independent thinking, common sense and determination can play a huge factor in this; as shown in the novel we've studied in class 'The Wave' and my two related texts 'I am Sam' and the short documentary 'Mr Cheng'. 'The Wave' a novel by Todd Strasser follows a high school student named Laurie Saunders and her class members who participate in an experiment conducted by their history teacher Mr. ...read more.

She takes one step at a time, hanging in there and sticking to her morals till eventually she convinces a few members that the whole thing is going too far and she doesn't stop until it's put to an end. The movie 'I am Sam' written and directed by Jessie Nelson follows the life of a father with developmental disabilities; after taking in a homeless women and her falling pregnant then leaving after the baby is born Sam is faced with the challenge of bringing up a daughter who soon enough will have a mental capacity higher then himself. Eventually after a misunderstanding his daughter is taken off him and he is left with the challenge of finding a lawyer who can fight his case to get his her back. In the beginning a high class lawyer refuses to take his case on. ...read more.

At only four years of age Laurie was taken into the city of Peking by his father who was 'looking for work' who then never returned, abandoning him and leaving him to fend for himself for the rest of his life. To begin with, his survival skills involved addressing his physical needs, which included him living in cemeteries as a form of shelter and looking around for whatever food he could possibly find. He demonstrated amazing resourcefulness in finding these basics for surviving at such a young age. Although this was not even the hardest factor he would have to survive, his greater challenge was surviving the mental and emotional trauma of these years. He later immigrated to Australia and began to build himself a life which he claims wouldn't be this way if he were to have known his family. Laurie also tells the documenter, "If I wasn't strong... he wouldn't be here," This documentary is a prime example of a person showing the qualities of a survivor. ...read more.