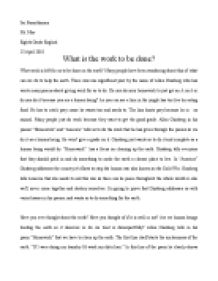 What is the work to be done? Commentary on the poems of Alan Ginsberg

﻿Sai Paranthaman Mr. Moe Eighth Grade English 23 April 2010 What is the work to be done? What work is left for us to be done on the earth? Many people have been wondering about this of what can we do to help the earth. There was one significant poet by the name of Allen Ginsberg who has wrote many poems about giving work for us to do. Do you do your homework to just get an A on it or do you do it because you are a human being? As you can see a lion in the jungle has too live by eating food. He has to catch prey cause he wants too and needs to. The lion hunts prey because he is an animal. Many people just do work because they want to get the good grade. Allen Ginsberg in his poems ?Homework? and ?America? tells us to do the work that he has given through the poems so we do it as a human being. He won't give a grade on it. Ginsberg just wants us to do it and complete as a human being would do. ?Homework? has a focus on cleaning up the earth. Ginsberg tells everyone that they should pitch in and do something to make the earth a cleaner place to live. In ?America? Ginsberg addresses the country it's flaws to stop the human war also known as the Cold War. ...read more.

?& put the planet in the drier & let it sit 20 minutes or an Aeon till it came out clean.? In this quote Ginsberg says to put the planet in the drier for 20 min. or an Aeon till it came out clean. Ginsberg clearly tells that he doesn't care about how long it takes to clean, but to just get it done as quickly as possible. He wants everyone to start now of cleaning the earth. As so I have proved that Ginsberg gave us this assignment he in his poems just doesn't talk about the earth as a whole. In one of his poems he singled out a country of which he talks about the mistakes that it has done. The poem is called ?America.? He does talk about politics in this and does varies from ?Homework?. As I give the close read of this poem it shows how America can be a better country, and of the mistakes that it has done. At the beginning of this poem Ginsberg straight out asks a question. ?America when will we end the human war?? Ginsberg is referring to the Cold War since that was the war that was currently happening that time. Ginsberg looks as if he wants to end this war from the way he asked the question. Ginsberg in the next line seems not to be proud of American. ...read more.

In it says it wants to eat America alive, take away its cars, grab Chicago, and put those auto plants in Siberia. Ginsberg is saying that Russians are rising in power, and that America needs to do something about this. For all of America's mistakes Ginsberg explains in this poem. Ginsberg wants America to realized its mistakes and stop this human war. He wants America to be more of a better country then to just fight with the Russians of who has more arms or who could control more of the planet. He just wants the world to be at peace. Ginsberg hopes that through this poem he explain the mistakes of the country through this poem and that people will read it. He wants them to think of the mistakes and take action right away so they can make America the better country. Also he wants people to read the poem ?Homework? so the world can work together to clean up this world. If different countries stop the fight then everybody can work together to make the world a better place to live. I have showed through both of these poems that Ginsberg has set us a task to do, and that Ginsberg's poetry varies of different political subjects. My thesis has been proven so whats next is to follow Ginsberg's task and to make it come true by having the world at peace, and cleaning up the earth so it is a much more natural place to live. ...read more.