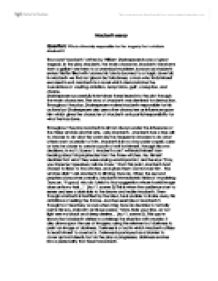 Who is ultimately responsible for the tragedy that unfolds in Macbeth?

Macbeth essay Question: Who is ultimately responsible for the tragedy that unfolds in Macbeth? The novel 'Macbeth' written by William Shakespeare is one of great tragedy. In the play Macbeth, the main character, Macbeth transforms from a gallant war hero to a tyrannical murderer. As soon as Macbeth enters this life filled with tyranny his fate is doomed to a tragic downfall. In Macbeth we find not gloom but blackness, a man who finds himself encased in evil. Macbeth is a novel which demonstrates the foundations of vaulting ambition, temptation, guilt, corruption, and choice. Shakespeare successfully intertwines these issues into the plot through the main characters. The story of Macbeth was destined for destruction. Throughout the play, Shakespeare makes Macbeth responsible for his actions but Shakespeare also uses other characters as influences upon him which gives the character of Macbeth only partial responsibility for what he has done. Throughout the play Macbeth is almost always under the influences of the three witches and his wife, Lady Macbeth. Macbeth has a free will to choose to do what he wants but he frequently chooses to do what others want or predict of him. Macbeth is in no way under a spell, curse or fate; he chose to create a path of evil for himself, through his own decisions. In Act I, Scene 1, Macbeth can't withhold himself from hearing about his prophecies from the three witches. He, himself decides that what they were saying was important, and he says "Stay, you imperfect speakers, tell me more." From this point, Macbeth had chosen to listen to the witches, and gives them control over him. The witches didn't ask Macbeth to kill King Duncan. When the second prophecy becomes a reality, Macbeth immediately thinks of murdering Duncan. "If good, why do I yield to that suggestion whose horrid image does unfix my hair..." (Act 1, scene 3) This is when the audience start to sense and see a dark side to the brave and noble Macbeth. ...read more.

Macbeth is responsible for putting power into the hands of Lady Macbeth and letting her influence him. Lady Macbeth tries to persuade Macbeth to kill Duncan but it is Macbeth who listens to her demands. "This night's great business into my dispatch." (Act 1, scene 6). Macbeth could have told his Lady to stop her plans. Instead, he lets himself be influenced. Macbeth puts power into the hands of Lady Macbeth by letting her arrange Duncan's murder. If Macbeth truly did not want to commit evil, he could have refused his Lady's arrangements. Instead, Macbeth accepts the plans and goes further by asking Lady Macbeth to "mock the time with fairest show" (Act 1, scene 7). She seemed to lose all her feminine qualities, including her love for children. She even goes as far as saying that she would have "dash'd the brains out" of a child if she had had one. Also, she oversteps her duties as a wife by taking over from Macbeth, defying the belief at the time that women were weaker and less important than men. Macbeth is relating his fear that he may have to do something violent in order to become king. Immediately after the witches had visited him, Macbeth begins to take their prophecies as a reality. He is almost trying to fulfil the tempting predictions, now that his mind is lustful for power, instead of remaining loyal to the King. The ambition of becoming king, when the witches' tell him his fortune is stronger than his conscience and ability from knowing right from wrong. The first thought in his mind when the witches' tell him his great fortune of becoming king, is to kill King Duncan to take his place. Banquo was also given news by the witches. They informed him that his children would be kings, yet he did not feel moved to murder. Banquo, who had never thought of murder, did not now think of murder. ...read more.

During a soliloquy, Macbeth states, "I have no spur to p***k the sides of my intent, but only vaulting ambition, which o'erleaps itself and falls on the other." Macbeth knows that killing is wrong but, his wanting to be king is so strong that he will do anything to become king. He can't stop himself from wanting to be king, his greed is so strong that he chooses to do wrong and kills Duncan. Here Macbeth is struggling with himself to choose between right and wrong, his evil thoughts overpower his goodness and he chooses to kill. Macbeth lists several reasons for going against the plan to kill Duncan. Therefore, Macbeth has time to think over his intentions and to take direct action. Macbeth is fully aware of the consequences of his actions and is thereby liable to be blamed for his fate. Spurred on by is own ambition Macbeth is responsible for his destructive fate. Through his thoughts, actions, and decisions Macbeth demonstrates his overwhelming guilt. Macbeth's desire to become king drives him to introduce plans for Ducan's murder. Macbeth puts power into the hands of Lady Macbeth by sending her the letter that informs her of the prophecies. Lastly, Macbeth acknowledges his guilt in several places in the story. Macbeth is aware that his thoughts are corrupt and he knows that justice will somehow punish him. However, even with all his power, Macbeth makes no attempt to reverse the situation and is thereby responsible for his tragic fate. * He was engulfed in his l**t for power and his battle with his conscience. This led to his insomnia and ultimate downfall. * Macbeth's poor judgment and ignorance slowly paved the dark path into doom; Macbeth journeyed to his murderous doom through his own free choice. * The witches influenced Macbeth's tragedy but he condemned himself. To be an ambitious man is a good thing, but when ambition leads to ignorance of other people it does not only damage the people you are hurting but as well as yourself. 1501 words ...read more.