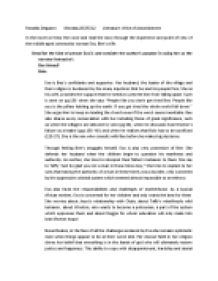 &quot;Wine of Astonishments&quot; Describe the kind of person Eva is and consider Earl Lovelaces purpose in using her as the narrator

﻿Ronaldo Degazon Monday 28/05/12 Literature: Wine of Astonishment In the novel we hear the voice and read the story through the experience and point of view of the middle aged community woman Eva, Bee?s wife: Describe the kind of person Eva is and consider the author?s purpose in using her as the narrator instead of : Bee himself Bolo Eva is Bee?s confidante and supporter. Her husband, the leader of the village and their religion is burdened by the many injustices that he and his people face. She as his wife, provides the support that he needs to prevent him from falling apart. Such is seen on pg 136 when she says ?People like you don?t get tired Bee. People like you is the pillars holding up the earth. If you get tired the whole world fall down.? She urges him to keep on leading the church even if the worst seems inevitable. Bee also shares every conversation with her including those of great significance, such as when the villagers are allowed to vote (pg 48), when he discusses Ivan Morton?s failure as a leader (pgs 138 -40) and when he realizes that Bolo has to be sacrificed (125-27). ...read more.

Bee?s sorrows are almost like Eva?s sorrows. This is because their bond is so strong that Eva feels what bee feels just as strongly, and in turn we feel it too such as Bee?s greatest moment of despair before he breaks the law. We also feel the moments of happiness through Eva since she is actually in the scene, such as when they have been granted the right to vote, when the church broke the law to worship in their original way and when the ban against the Shouter Baptiste was repealed. Consider the use of symbols in this novel: Bee?s Cow. What does it mean to him? Near the end of Chapter Five he sells it, why? What does selling that cow reveal about the circumstances under which he made that decision, and about Bee himself? Bee?s cow represents a sacrificial lamb. A sacrificial lamb is a metaphorical reference to a person or animal sacrificed for the common good. This is especially seen in the bible, such as when God stops Abraham from killing his son and provides with a lamb. Jesus himself was a sacrificial lamb. He died for our sins, the common, for our forgiveness from God. ...read more.

He is contemptuous of weak people like Primus, eager to please. Bolo?s death symbolizes Jesus death on the cross for us. His body at the foot of the steps, conjures up again the crucifixion image, ?his two feet close together and his arms stretch out? (page 133). A thunderstorm suddenly breaks out as it did as Jesus? death in Calvary. Eva makes the comparison even more explicitly. His death she says: ??.just give him the chance? blame it all on Bolo, make him the victim and the sacrifice, make him the Christ who they let the soldiers crucify on the cross because they didn?t care enough.? Bolo uses his death as a sacrifice for the people. He urges them that just as they killed him and stood up for themselves to get Primus? daughter, they must stand up to the authorities to sustain their African integrity and to uphold the Shouter Baptiste Church. Bolo helps us to understand the themes of bravery and manhood. For example, both qualities are shown when he faces the policemen in order to stand up for the church and the people of the Shouter Baptiste. He also helps us to understand the theme of leadership although he represents only one kind of leadership; warrior leadership where Ivan Morton represemts political leadership and Bee, spirititual leadership. ...read more.