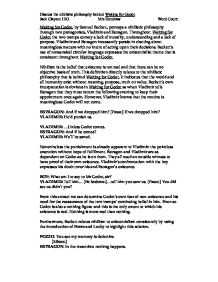 World Literature 2 The Nihilism in Waiting for Godot

Waiting for Godot, by Samuel Beckett, portrays a nihilistic philosophy through two protagonists, Vladimir and Estragon. Throughout Waiting for Godot the two tramps convey a lack of morality, understanding and a lack of purpose. Vladimir and Estragon incessantly persist in chatting about meaningless matters with no intent of acting upon their decisions. Beckett's use of nonsensical circular language expresses the existentialist theme that is consistent throughout Waiting for Godot. Nihilism is the belief that existence is not real and that there can be no objective basis of truth. This definition directly relates to the nihilistic philosophy that is behind Waiting for Godot. It indicates that the world and all humanity exist without meaning, purpose, truth or value. Beckett's own interpretation is obvious in Waiting for Godot as when Vladimir tells Estragon that they must return the following evening to keep their appointment once again. However, Vladimir knows that the routine is meaningless: Godot will not come. ESTRAGON: And if we dropped him? ...read more.

This lack of caring enables Beckett's combination of nihilism and existentialism throughout Waiting for Godot and the similarities that define it In addition to this, a common factor in all of Beckett's drama is that the figures portrayed are all imprisoned. ESTRAGON: ...Let's go. VLADIMIR: We can't. ESTRAGON: Why not? VLADIMIR: We're waiting for Godot. The imprisonment of Beckett's protagonists forces the audience's attention upon the extent to which we depend on mobility. Mobility offers the chance of escape from an undesirable situation. Without it we are reduced to a passive, vegetative existence. Beckett portrays this passive existence, this belief that existence is not necessarily real. ESTRAGON: We always find something, eh, Didi give us the impression we exist? VLADIMIR: [Impatiently.] Yes, yes, we're magicians. From this, we can determine that Beckett represents the imprisonments of the human consciousness within the bounds of infinity and eternity. Beckett's so-called nihilism can thus be seen as no more than the necessary outcome of his refusal to deal in generalisations and truths. ...read more.

VLADIMIR: True...we don't know him very well...but all the same... ESTRAGON: Personally I wouldn't even know him if I saw him. Vladimir and Estragon's confusion about the appearance of Godot mirrors that of the audience's. This confusion over Godot's appearance therefore leads to the questioning of his actual existence. Furthermore, Beckett's induced confusion relates to his misuse of time. When Pozzo's watch stops, not only is there confusion on and off stage, but there is also a stoppage of time. VLADIMIR: Time has stopped. POZZO: [Cuddling his watch to his ear.] Don't you believe it sir, don't you believe it. This immediately impresses upon the audience the nihilistic philosophy behind Waiting for Godot. The stoppage of time introduces the audience to a new way of presenting nihilism. As one of nihilism's major definitions suggests "a firm belief that life is meaningless." This statement relates directly to Pozzo as his seemingly busy life is ruled by time and because of this Pozzo loses his meaning in life when time stops. ?? ?? ?? ?? Discuss the nihilistic philosophy behind Waiting for Godot. Jack Clayton 12G Mrs Henshaw Word Count: ...read more.