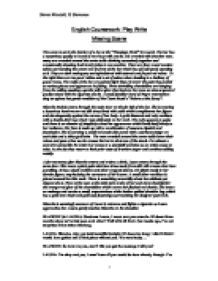 English Coursework: Play Write Missing Scene The scene is set in the interior of a bar at the "Flamingo Hotel" in Laurel. The bar has a mysterious quality to it and is very hazy with smoke. It's crowded with drunken men, many are crowded around the centre table drinking excessively together and occasionally shouting loud bawdy jokes to one another. There are four round wooden tables surrounding the centre one in front of the bar which has six tall stools standing at it. They are dark mahogany and upholstered with tattered and frayed red velvet. To the right there are two pool tables and a set of saloon doors leading to a hallway of guest rooms. The walls of the bar are painted light blue; however the paint has peeled at various places and appears to be fading. Three dwindling chandeliers are hanging from the ceiling exuding a gentle yellow glow that lends to the room an almost spectral quality mixed with the cigarette smoke. A small familiar band of n***o entertainers sing an upbeat but gentle rendition of the Count Basie's "Bolero at the Savoy". Blanche Dubois enters through the main door on the far left of the bar. She is wearing a luxurious hand-woven red silk dress lined with sable which compliments her figure and sits eloquently against the curves of her body. ...read more.

BLANCHE: May I have a cr�me de Violette, sir. LAURA: That sounds exotic! BAR TENDER: Would you like one too, m'lady? LAURA: I suppose it wouldn't hurt to try it. Can you make me one as well? BAR TENDER: (With exaggerated courtesy) Certainly, it would be my pleasure. I shall be right back with your drinks shortly. LAURA: (turning to Blanche) The man and woman living in the room above me are terribly noisy, Blanche. It sounds like a war going on up there! They are constantly moving furniture around and decorating. There hasn't been any silence the whole time I've been there. The people are so noisy; it's a lot noisier than my mother's house. I miss her. She was always pressuring me to go find a man and settle down, but I was too shy. Now I'm living here on my own. Tom must be worried sick. BLANCHE: Tom...? Yes... I remember you showed me a photo. He's your brother isn't he? BAR TENDER places their drinks in front of them. LAURA (frowning): Yes, it's so strange not being around my family, I feel like I have grown up too fast. You see, I used to have a little set of glass animals I would play with, a bit of a menagerie. ...read more.

STANLEY (suprised and angry): Well I can't believe what I'm seeing. If it isn't Miss Blanche DuBois! I thought I'd gotten rid of you! What are you doing here? I thought you had never heard of this place? BLANCHE (improvising feverishly): How do you know my name? STANLEY: What are you talking about, I know it's you! Suddenly an unshakable fear comes over BLANCHE and a dead silence falls over the room as STANLEY raises his voice. A mood of hysterical panic fills her as she realises the situation she is in. A murmmering of a group of spectral men is hushed. BLANCHE step back and begins to sob uncontrollably. BLANCHE (her voice trembling): Get away from me Stanley. I haven't hurt anyone, just leave me alone. The air begins to fill with ominous and inhuman voices like calls in a jungle. The shadows and pallid reflections move deviously as serpants along the sand. STANLEY'S mouth slowly curving into a grin as he watches BLANCHE delve into an unforgiving and bleak void of insanity. The barely audible "Blue Piano" begins to play louder turning into a roar of a herd of charging cattle. BLANCHE passes out and the "Blue Piano" goes softly as the stage descends into darkness. ?? ?? ?? ?? Steven Blundell, 13 Stevenson Steven Blundell, 13 Stevenson Steven Blundell, 13 Stevenson ...read more.