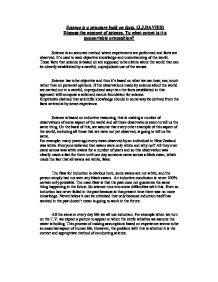 Science is a structure built on facts. (J.J.DAVIES)Discuss the account of science. To what extent is it a supportable proposition?

Science is a structure built on facts. (J.J.DAVIES) Discuss the account of science. To what extent is it a supportable proposition? Science is an accurate method where experiments are performed and facts are observed. It's used to seek objective knowledge and understanding of the world. These facts that science is based on are supposed to be claims about the world that can be directly established by a careful, unprejudiced use of the senses. Science has to be objective and thus it's based on what we can hear, see, touch rather than on personal opinions. If the observations made by science about the world are carried out in a careful, unprejudiced way then the facts established in this approach will compose a solid and secure foundation for science. Empiricists claimed that scientific knowledge should in some way be derived from the facts arrived at by sense experience. Science is based on inductive reasoning, this is making a number of observations of some aspect of the world and all these observations seem to tell us the same thing. On the basis of this, we assume that every other example of this aspect of the world, including all those that we have not yet observed, is going to tell us the same. ...read more.

It seems we can't escape the circularity. Hume's criticism of induction can be related to his idea that one thing causes another. He pointed out that we proportion our belief that something is the case to the evidence we have for it. If we have a large number of experiments that gives us the same result, if one was to backfire and go wrong we tend to assume that the majority is right and that the one that failed was due to some kind of error. To illustrate this for example, we assume that A is the cause of B. However all we have observed is the constant union of A following B and from this we assume that A has caused B. But this tends to be in some way an association of ideas and not something that we can prove to exist in this world. Furthermore he claimed that when we see something happening once and assume it will happen again is not down to psychology and not logic. For example the fact that laws of physics have been found to hold good in the past does not logically entail that they will continue to do so in the future. ...read more.

Popper believed that we should always formulate our theories as clearly as possible so we could expose them to refutation but nevertheless says that we shouldn't abandon our hope in the theories so easily because it would show that they were not tested as carefully as they should be. He also claimed that in science what we claim to prove to know as true, is always possible that it will be turn out to be false. Is it not only regarding science but all over time most of what has been known at one time or another has eventually turned out to be false. So is a mistake to do what science does and that is to namely prove the truth of a theory, or justify our belief in a theory since it is logically impossible. To conclude, it seems that the popular view that the sciences are bodies of established fact is completely flawed. Nothing in science as we have seen is permanently established. Science is quite visibly changing all the time as we have seen. What we observe to be a fact can depend on lots of things. Such as the technology we have, a naked eye can't see the same as what a telescope can; and to what level can we trust induction. . ...read more.