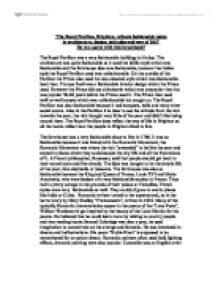 The Prince used an Indian style on the front of the Pavilion. This was not a very fashionable thing to do because not a lot of people liked the style, but the interest in Indian architecture grew.There are not many examples of the Indian style on the inside of the Royal Pavilion but the outside has many of them. If you compare the Taj Mahal and the Pavilion you can see many similarities for example, the domes and minarets are indentical to each other. The style also became fashionable because the Pavilion's exterior has many other Indian Moghul style features like scalloped arches, Islamic battlements and graceful stone tracery-suggesting Indian Jali work but they were still popular. The Indian style became popular because the epic Bhagavad Gita, the Upanishads and the culture-an alternative and possibly comparable to the ancient Greecs. This all added to the Romantic appeal of Indian architecture, and it was linkes into the Romantic Movement. The Stables (today know as the Dome) were designed in the Indian style,William Porden chose this design to be done. The Indian style became fashionable because it was part of the British Empire so it showed that Britain was the most powerful nation, back then. There are also Domes. England also did a lot of trade with India. However the actuall building is not a real Indian building, the Prince had never even been to India before. The style was also popular because it was supposed to mimic Indian palaces, but Queen Victoria hated it so it wasn't used for much until WW1 when a hospital for Indian soldiers was based there. ...read more.

From the descriptions on the rooms in the Pavilion it is clear to see that the rooms were meant for wealthy people only and the servants were not allowed in there because they had their own rooms which had much less effort put into them because they are just plain and had not decoration. This shows us that the rich people didn't care about the servants and didn't treat the with any respect. As the wealthy people were as rich as the Prince there were very strict etiquette (rules about behavior) that people in this level of society had to follow. In the 18th and early 19th centuries there were great divisions in society between the 'haves' and the 'have-nots'. There was a huge gulf between the rich and the poor and the two groups never met.(The upper classes never visited factories or coal mines or went to the poorer areas of large cities.) The contrasting areas of the Pavilion and the arrangements made to keep guests and servants apart reflected the divisions in wider society very well. The Pavilion connot tell us everything about the way of life in the late 18th and early 19th centuries, but it can tell us a lot about the lives of certain groups of people, particularly the so-called 'leisured classes' who were looking for pleasure and entertainment. It also shows the huge gap that existed between the rich and poor. In conclusion, the Royal Pavilion was built to Prince Regents taste and he didn't care what other people thought of it, it also shows the way that the wealthey people lived. Also the Royal Pavilion does reflect fashionable tastes in architecture, design, attitudes and way of life because of the Indian and Chinese styles used. By Sean Kirkpatrick 10HS. ...read more.